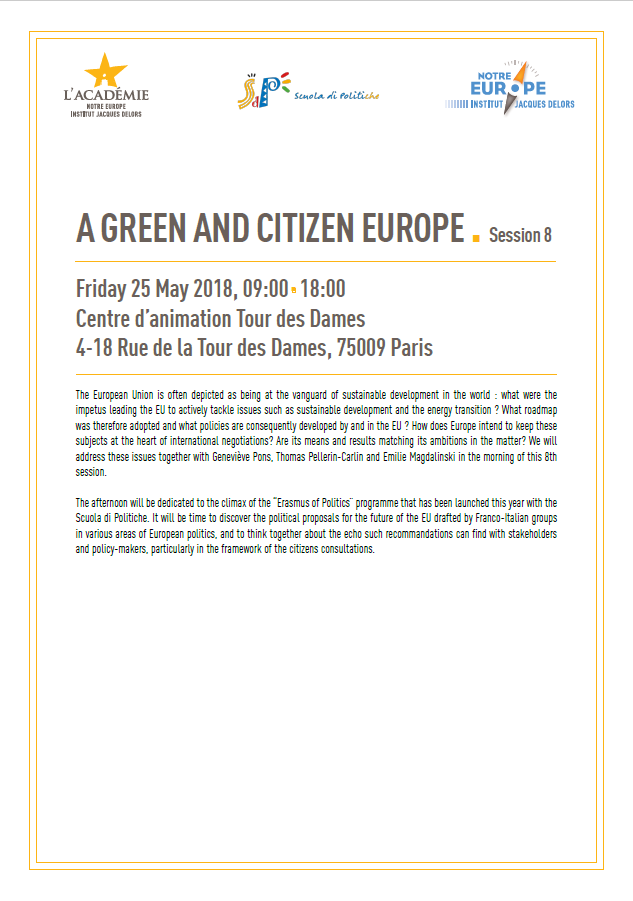 The eighth session of the Notre Europe Academy takes place on the 25th of May, at the Center la Tour des Dames. During this day, participants will have the occasion to trace back the growing importance of environmental issues at the European level and how it was progressively translated within European policies and priorities. In doing so, they will have a comprehensive approach on sustainable development issues (from the environmental, energy or citizen perspectives) and be able to understand current debates on them.

The European Union is often depicted as being at the vanguard of sustainable development in the world: what were the impetus leading the EU to actively tackle issues such as sustainable development and the energy transition? What roadmap was therefore adopted and what policies are consequently developed by and in the EU? How does Europe intend to keep these subjects at the heart of international negotiations? Are its means and results matching its ambitions in the matter? We will address these issues together with Geneviève Pons, Thomas Pellerin-Carlin and Emilie Magdalinski in the morning of this 8th session.

The afternoon will be dedicated to the climax of the “Erasmus of Politics” programme that has been launched this year with the Scuola di Politiche. It will be time to discover the political proposals for the future of the EU drafted by Franco-Italian groups in various areas of European politics, and to think together about the echo such recommandations can find with stakeholders and policy-makers, particularly in the framework of the citizens consultations.