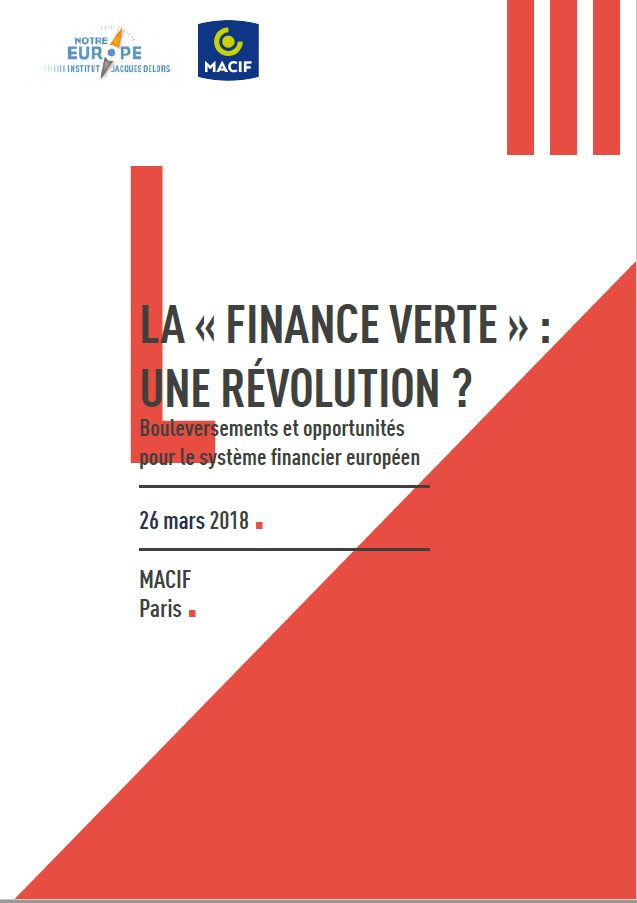 The Jacques Delors Institute, jointly with the MACIF, organises a seminar on the notion of “sustainable finance” and its development into European political initiatives, following the publication of the High-Level Expert Group on the 31st of January and the recently announced “Commission’s Action Plan for a greener and cleaner economy” of the 8th of March.

The 2015 Paris Agreement gave a new momentum to the economic developement of the European Union, by which our economic and productive apparatus have now to be adapted to environmental issues. However, if the EU wants to reduce its carbon emissions by 40%, as promised, it would need to mobilise substantial ressources. That is why the European Commission has mandated a group of experts to identify potential solutions that may favour the emergence of an “European sustainable finance”. The report was made public on the 31st of January and highlights three main areas for reform: improving the investment chain’s transparency; developping, at the European level, a new taxonomy; developping the range of available “green” bonds and financial assets and strenghtening their credibility nand visibility to investors. The main goal is to “incentivise green finance across the entire investment chain and change the mind-set of those who manage our money”, which requires “no less than a transformation of the entire financial system, its culture, and its incentives”. The implementation of the report’s recommandations seems essential, but their ambition calls for a strong and steady political impetus if the institutions want them to be effective. Would the sustainable finance be a “realistic uopia”?

Moderator: Eulalia RUBIO, senior reserach fellow at the Jacques Delors Institute, in charge of economic affairs and the European budget

On this topic, you can read the paper written by Jean-François Pons : “La finance verte : une croissance à accélérer“.