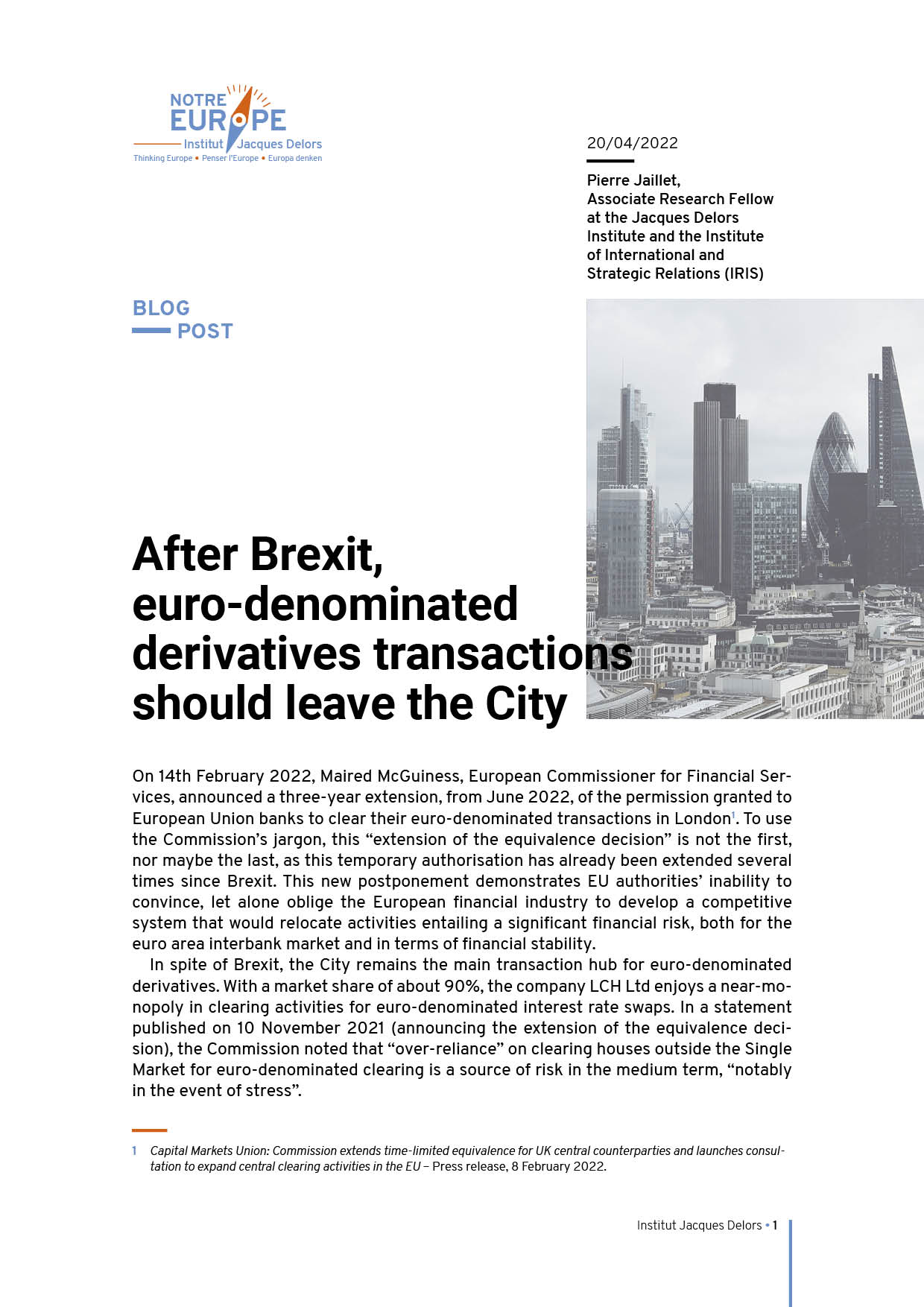 On 14th February 2022, Mairead McGuiness, European Commissioner for Financial Services, announced a three-year extension, from June 2022, of the permission granted to European Union banks to clear their euro-denominated transactions in London[1]. To use the Commission’s jargon, this “extension of the equivalence decision” is not the first, nor maybe the last, as this temporary authorisation has already been extended several times since Brexit. This new postponement demonstrates EU authorities’ inability to convince, let alone oblige the European financial industry to develop a competitive system that would relocate activities entailing a significant financial risk, both for the euro area interbank market and in terms of financial stability.

In spite of Brexit, the City remains the main transaction hub for euro-denominated derivatives. With a market share of about 90%, the company LCH Ltd enjoys a near-monopoly in clearing activities for euro-denominated interest rate swaps. In a statement published on 10 November 2021 (announcing the extension of the equivalence decision), the Commission noted that “over-reliance” on clearing houses outside the Single Market for euro-denominated clearing is a source of risk in the medium term, “notably in the event of stress”.

To justify this new extension, the Commission stated recurrent delays in the work underway to prepare a transfer of these activities to the euro area, a move deemed premature as it would lead to a “cliff-edge scenario” due to the sudden shift from one platform to another. It undertook to work with regulatory authorities and the financial industry to promote (unspecified) measures aimed at developing a competitive internal hub, with a view to creating a framework conducive to a relocation within the EU. It also stated that it was launching a “public consultation” to come up with a “strategy to reduce this over-reliance on third-country systemic CCPs (central counterparties)”. It may seem surprising that such a public consultation is launched just as the relocation process should have been reaching completion. Does this mean that there is no strategy right now?

While the issue of regulatory equivalence has been raised since Brexit, the location of a key component of the euro-denominated money market in the City was already out of step in relation to the monetary union. This is why the ECB’s initial oversight framework required clearing houses to be located in the euro area when transactions were settled in euros. However, the United Kingdom brought an action before the European Court of Justice in 2015, leading the Court to annul this provision, considering that the ECB does not have the necessary competence, limited to payment systems, and that the framework infringed on the freedom of establishment and of provision of services within the Single Market. Naturally, this argument is no longer valid due to Brexit.

The EMIR (European Market Infrastructure Regulation)[2], which records the commitments made by the G20 in 2009 with a view to improving transparency and security on derivatives markets, now subjects third-country CCPs to greater oversight. In particular, so-called Tier 2 systemic CCPs are directly monitored by the ESMA (European Securities and Markets Authority). The ECB can also require, for euro-denominated transactions, compliance with certain conditions concerning liquidity, the quality of collateral and the setting of margins. Ultimately, it is up to the Commission, on the basis of the ESMA’s recommendations and following the opinion of the ESRB (European Systemic Risk Board) and the ECB, to evaluate whether these conditions are met. If this is not the case, the Commission can decide not to recognise a systemic CCP, making the relocation of the activities concerned possible. That said, this decision must be approved by the Council and the European Parliament…

This impressive regulatory provision allegedly provides sufficient safeguards to ensure compliance with European regulations and financial stability requirements. This is an argument put forward by the European authorities to justify a new extension of the equivalence decision. It is, however, important to make two comments here. Firstly, a systemic CCP (such as LCH Ltd) may not strictly comply with some of the EMIR’s requirements if it can demonstrate that its national legislation is “comparable” to the prevailing EU legislation. The ambiguity of this term leaves open the possibility that a systemic CCP exempts itself from some functional obligations defined by the EMIR to comply with those stated in its own jurisdiction (this could also lead to distortions of competition).

A more fundamental issue concerns what would occur in the event of a severe crisis resulting in a default risk. This concern led to the European authorities launching a systemic risk assessment procedure in 2021 of LCH Ltd and ICE Clear. While these supervisory procedures are relatively well established, the fact is that the terms of CCP resolution remain vague on an international level[3]. They remain mainly in the hands of national jurisdictions and cannot be determined ex-ante. Yet any resolution procedure is likely to mean that the government concerned is liable, for example, in the event of a bail-out. If there is a default of an off-shore systemic CCP, however unlikely but not impossible, what would be the European authorities’ scope of action? The systemic risk component remains a blind spot of the Commission’s equivalence framework.

There is also the issue of relations between the central bank in the country of residence of the systemic CCP and the central bank issuing the transaction’s currency of denomination. Currently, British CCPs enjoy a deposit facility in euros via TARGET 2 and the Bank of England and the ECB have a swap agreement to manage requirements for emergency liquidity. These provisions are designed on the basis of a system that is running smoothly. What happens in the event of a severe crisis? It seems difficult to envisage the ECB playing the role of lender of last resort – directly for the CCP concerned or through the Bank of England – to save an establishment outside its jurisdiction.

One difficulty of this situation is that it involves both private and public interests, which complicates the incentive scheme. In terms of private interests, the main player, LCH Ltd, supported by the UK government and the Bank of England, has developed a clever set of arguments, convincing in some respects, in favour of maintaining the status quo[4]. LCH Ltd is careful to pledge its loyalty to the EMIR’s regulatory conditions and oversight by the ESMA. It argues that the euro is a “global” currency, that EU companies only account for a minority share (27%) of the notional amount of its euro-denominated clearing activities, that its cross-currency clearing services (a majority of which are denominated in currencies other than the euro) provide clients with low-margin services while enabling them to diversify their risks. Seen from this perspective, the relocation of euro-denominated transactions to the EU would result in a fragmentation of the market that would be detrimental to both financial stability and the interests of European banks, which are happy with the status quo and overestimate the investment costs related to relocation. In addition, relocation would give rise to a complex conflict of allocation between the two candidate CCPs to recover business from the City, LCH SA (French subsidiary of LCH Ltd) and German company Eurex Clearing AG[5].

In terms of public interests, the Commission, as we have seen, is stalling for time, is half-heartedly speeding up the process, launching a consultation, claims to be waiting for the ESMA’s assessment of systemic risks related to British CCPs and “insists on the need” for EU banks to reduce their exposure on them. None of this is particularly binding. National treasuries, against the backdrop of competition between the financial centres of Paris and Frankfurt in particular, are not encouraging their banks to agree on the investments required to set up a competitive system; Eurosystem[6] and the ESRB are being uncommonly discreet on this topic…

This procrastination naturally plays into the arguments of those advocating the status quo. Without a credible alternative to London-based CCPs, relocation will always entail more disadvantages than benefits, in terms of economic efficiency and financial stability. In the meantime, the combined inaction of the authorities and the industry consolidates the City’s key role as an administrator of euro-denominated transactions. Beyond symbolic importance, this situation also demonstrates the EU’s inability, thirty years on from the launch of the Single Market and more than twenty years after the launch of the euro, to establish a single capital market.

[3] The Financial Stability Board (FSB) published recommendations in 2014 with a view to establishing a standardised international resolution framework, including the contingent creation of crisis management groups.

[5] One reasonable solution would be that these two companies share the business as part of a polycentric network of EU financial centres that acknowledges their comparative advantages (such as Eurex’s long-term interest rate derivatives and LCH SA’s repo services).

[6] With the noteworthy exception of the Governor of the Banque de France, François Villeroy de Galhau, who recently criticised the risks of maintaining the status quo and reminded that it is “our collective responsiblity to reduce this systemic risk”. Address at Eurofi – Paris, 23 February 2022. 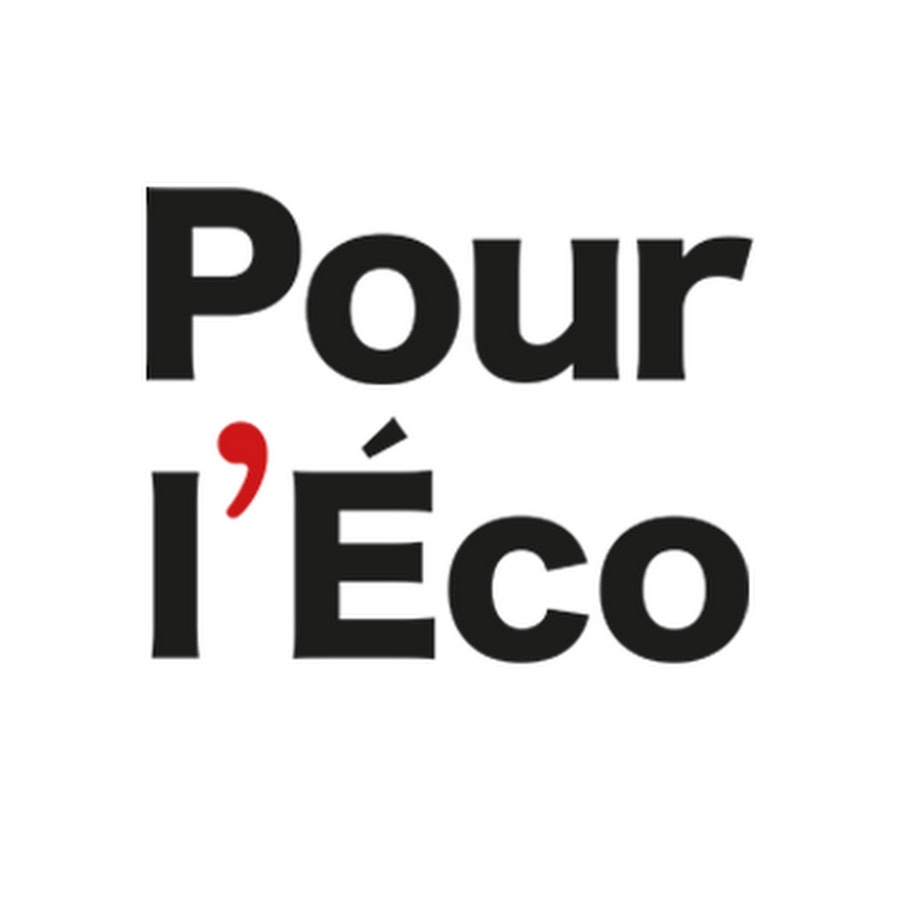