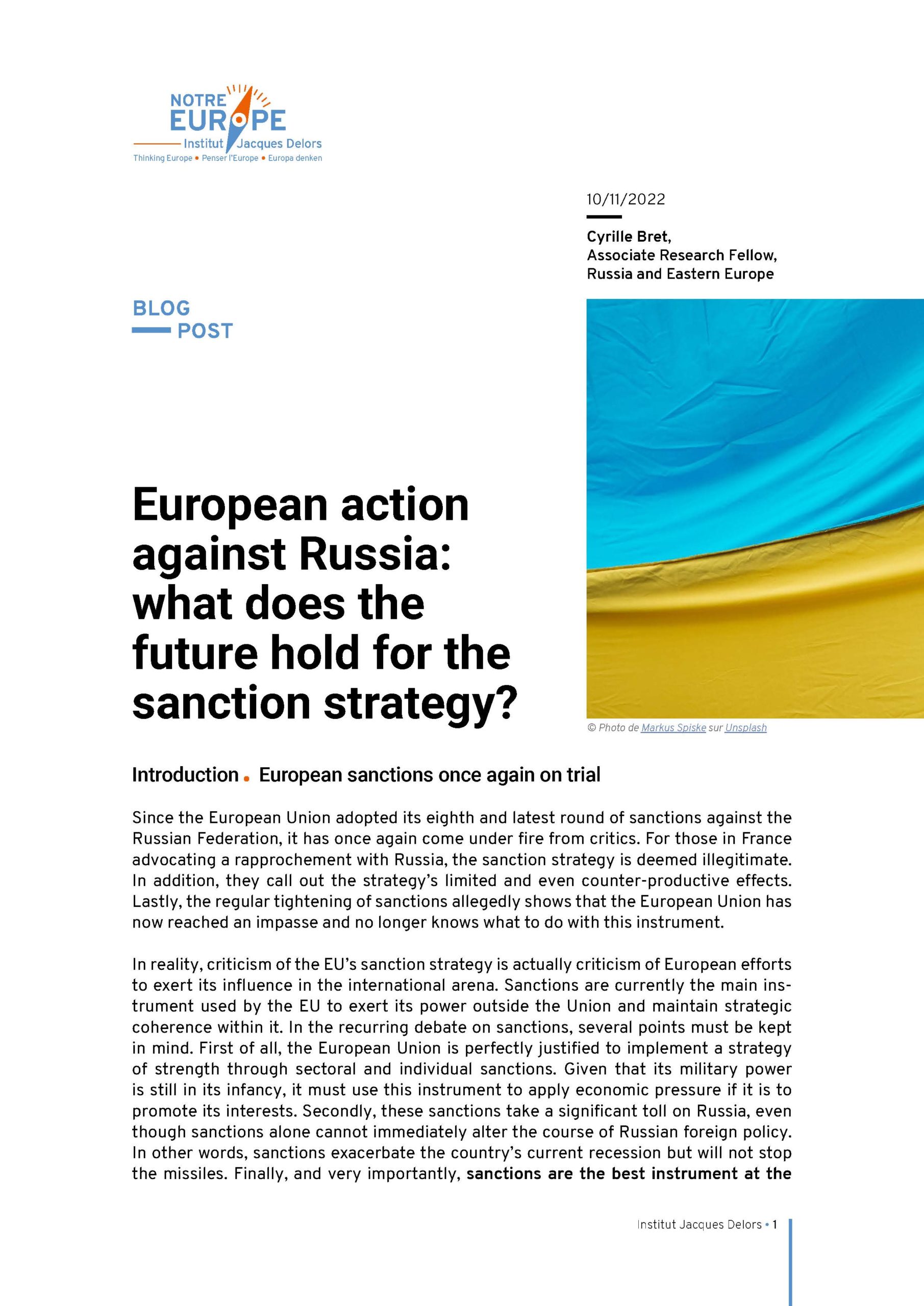 Introduction. The outcome of the war

One month on from the outbreak of war in Ukraine, it is unfortunately not yet time to draw our final conclusions. However, an initial provisional political stocktaking exercise is particularly necessary as the conflict is experiencing a moment of uncertainty which may lead to a tipping point. The future of Ukraine, the importance of Russia and the security of Europe are at stake and the fighting has not yet settled anything. Russia’s “special military operation” launched on 24th February had a threefold objective: to change the regime in Ukraine, to confirm Russia’s power and to show up the European Union’s weaknesses. Yet today, despite high-intensity fighting and snatches of diplomatic discussions, the fates of the three main protagonists of this war have not yet been sealed. We could even go further and consider that the four weeks of armed conflict place each of the stakeholders at a crossroads that remains uncertain.

1. Ukraine: from mutilated sovereignty to a national reawakening?

When analysed one month ago following Russia’s declaration of its ambition, Ukraine’s State, nation and sovereignty were in a particularly ambivalent situation.

The Russian invasion stepped up and heightened the crisis caused in 2014 by the Russian Federation’s annexation of Crimea and Russia’s support for separatist entities in the Don Basin (Donbas): the self-proclaimed “Republics” of Luhansk and Donetsk. Not only has Russia unilaterally recognised these entities as independent States but it has also invaded more than 10% of Ukraine’s territory. It has surrounded, struck or conquered the main conurbations, destroyed key military and civilian infrastructure, deliberately emptied the country of a large share of its population and placed the Ukrainian State under a direct threat of obliteration. In other words, since the acknowledgement of Ukraine’s independence in 1991 and the mutilation of its sovereignty in 2014, Ukraine has never been so close to ceasing to exist as a State and as a nation. This is exactly the intention expressed in press releases from the Russian presidency: to deny the very existence of a Ukrainian nation-state.

And yet, despite the literally existential dangers that Ukraine has been facing for the last four weeks, the Ukrainian nation has asserted itself with a resilience that commands admiration. In response to the initial attempt at Blitzkrieg, the weaker country stood up to the stronger in a war that combines conventional military combat, resistance operations, cyberattacks and the mobilisation of civil society. In symbolic terms, the narrative battle has been fought with determination by the Ukrainian presidency: President Zelensky, originally a Russian-speaker, has spoken openly before Western parliaments in Ukrainian and has tirelessly asserted the Ukrainian identity and his desire to tie the country to Western Europe. In short, in its bid to wipe the country from the map of Europe, Russia has awakened Ukraine’s identity.

Today, Ukraine as a nation is firmly standing between the assertion of its existence and the threat of annihilation.

The outcome of the war also leaves Russia’s fate fraught with uncertainty.

Launched following a decade of armed forces modernisation, an external military operation conducted in Syria, an interposition operation led in the Caucasus between Armenia and Azerbaijan, and a year of rising international oil and gas prices, this “special military operation” was also intended to reassert Russia’s power over the European continent against NATO and the European Union. The Putin presidency has indeed shifted position in its power struggle against the West. Rather than maintaining the uncertainty regarding its role in Ukraine, Moscow decided to officially declare war, taking for itself the “guarantees” of security that it has demanded from the West for several years. Its invasion of Ukraine has now traumatised civilians, lastingly weakened the Ukrainian economy, steamrollered Ukrainian public authorities and forced the West to refuse to engage in military force.

However, this assertion of Russian power has clearly been marred by several forms of direct and indirect antagonism: the Russian army has been contained (but not defeated) by Ukrainian military resistance, Ukraine’s neutrality, intended by the Russian regime, has not been compelled by warfare, the European Union’s alleged weakness has been negated by a series of economic, diplomatic, technological and individual sanctions, which isolate Russia from Europe. While Russian military victory is still a possibility, diplomatic and political success are becoming increasingly unlikely.

In brief, the short-term assertion of Russian power may be cancelled out by a lasting political decline on the European continent. Russia’s fate still hovers between an assumption of power and an acceleration of its decline.

3. EU: between power and impotence

The European Union also finds itself at a crossroads after four weeks of a war in which it is not directly involved but which affects it profoundly.

The European Union failed to prevent or stop the Russian offensive. An unparalleled economic, financial, legal, cultural and institutional power on the continent, day after day it is faced with its military and diplomatic impotence and failure to protect civilians in the conflict areas. Its historic sanctions have neither stopped the columns of tanks which have surrounded the main conurbations, nor intercepted the hypersonic missiles that have hit the Ukrainian armed forces, nor defended the civilians in Mariupol, Kherson and other towns. Faced with a military conflict, the attributes of European power may deprive Russia of a full victory, but cannot inflict a defeat.

That said, the war in Ukraine has led to the European idea reaching several historic milestones in the space of a few weeks. Firstly, the EU has dared to implement widespread sanctions, not only with a view to influencing Russian policy but with the intention of modifying it completely. The current European sanctions have totally changed in terms of content and purpose: before, they were measured and limited to avoid the power struggle adversely affecting Europeans to an excessive degree. Now, the EU wants to change Russian foreign and domestic policy.  It then accepted to provide one of the warring parties, Ukraine, with defence equipment. This is a decisive step forward for the EU as, in doing so, it clearly identifies its ally and its enemy. Lastly, the European Union now knows that its power profile is incomplete: it lacks the military capacity to defend its values and interests itself in the field. This new awareness is now irreversible.