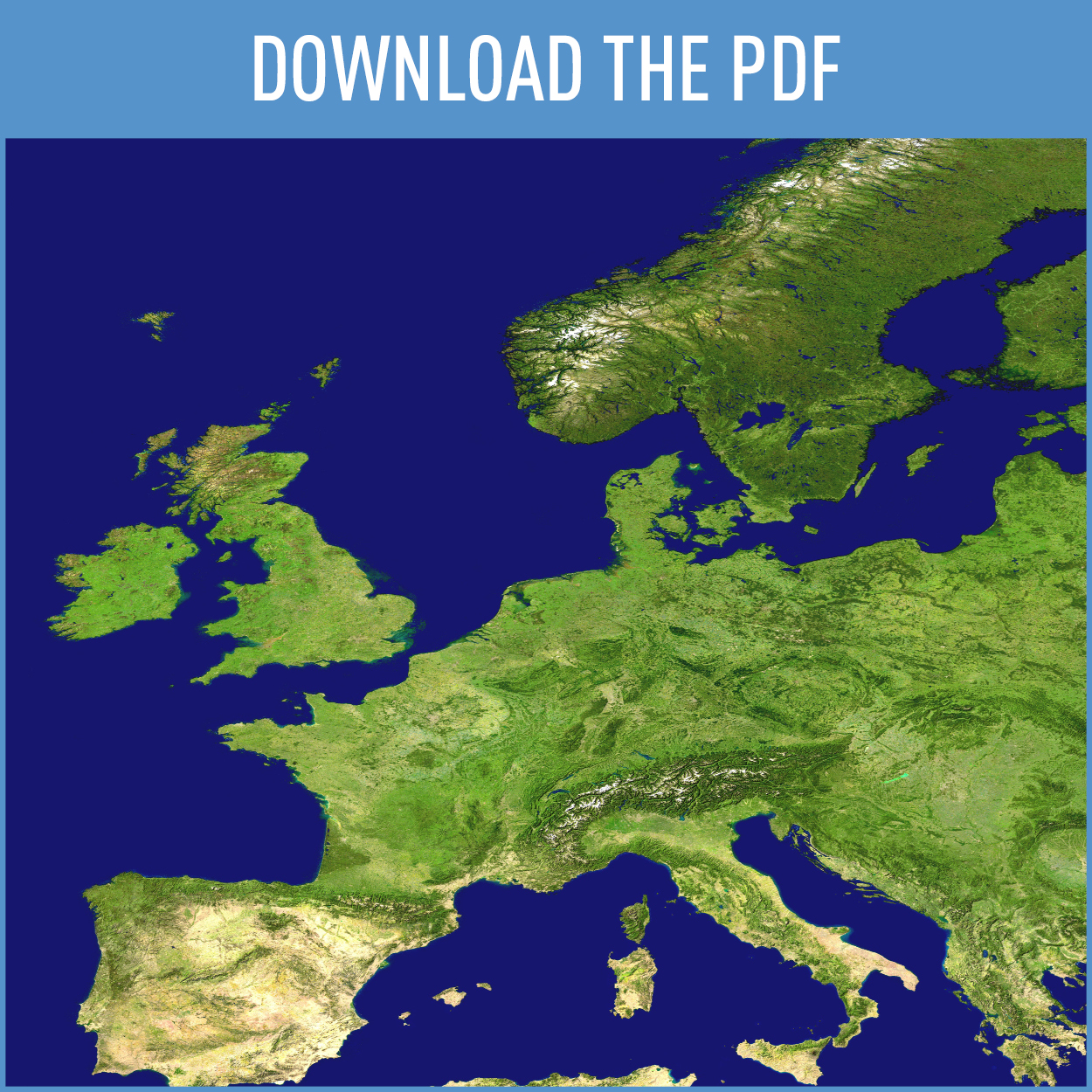 Brexit is bad news for the European Union. It is diminishing the EU’s economic, political and strategic weight in the world.[1] Brexit also raises the possibility of real political reversal and some even speak of a risk of ‘disintegration’.[2] However, from the perspective of national governments, it is remarkable that the 27 remaining member states presented a ‘united front’ in the face of the United Kingdom’s national divisions. The balance of power has been clearly in favour of the EU, for a number of reasons: an acute awareness of the pressing need to preserve the integrity of the internal market that is at the heart of the EU’s political existence; a unanimous preference not to give the UK outside the EU equivalent status to that of a member state; less trade dependence of the EU on the UK than the other way round; and a unanimous mandate by the remaining 27 member states for the EU’s chief negotiator, Michel Barnier. Finally, it should be noted that the 27 member states have tended to show solidarity and unity when it comes to negotiating with a member state that will become a ‘third country’ outside of the EU. What has been less analysed is the political impact of Brexit on public opinion. However, at the moment when the UK is about to leave the EU, it is clear that Brexit has had a limited effect on public opinion in the 27 EU member states and that eurosceptic political parties (which exist everywhere) have not managed to capitalise on the departure of the UK from the EU.

All surveys carried out after the British referendum suggest that public opinions have become more favourable to EU membership in all EU member states, including in the United Kingdom.[3] Similarly, other survey data show that support for EU membership has increased significantly everywhere since the Brexit referendum (Figure 1).[4] 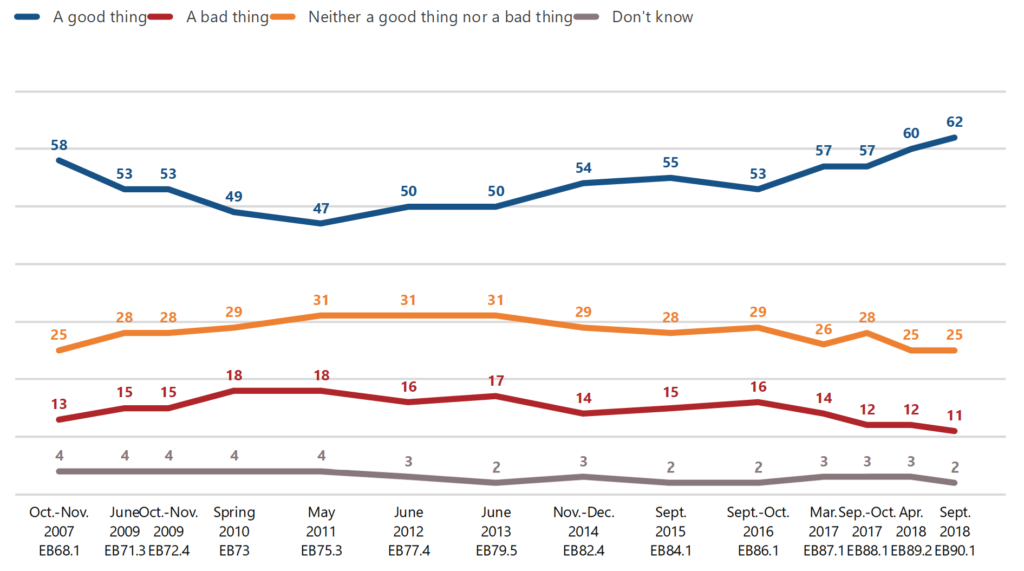 Moreover, as Figure 2 shows, there is no  majority in favour of leaving the European Union in any EU27 country. This is even the case in the most eurosceptical countries at present, such as Italy and France.[5]

Moreover, the most recent research shows that immigration has a much stronger impact on the euroscepticism of public opinion in the EU than Brexit.[6] This explains why eurosceptic political parties now seek to promote a narrative against the EU that is mainly built around rejecting immigration. Immigration is seen as a top priority on the political agenda in more than two thirds of the EU27 member states and is the foremost issue fuelling euroscepticism (Figure 3). 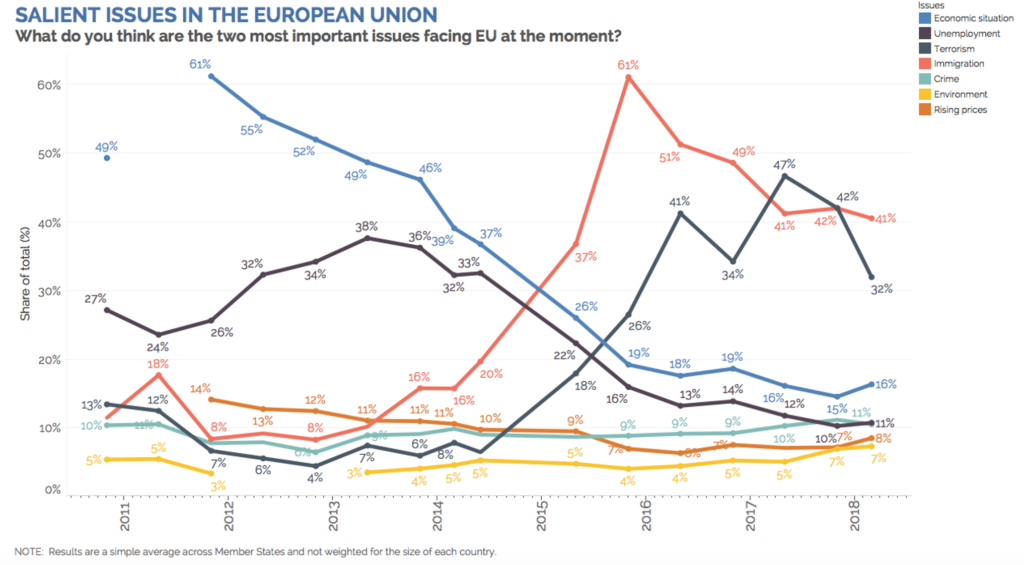 There are three main reasons why Brexit has not been a rallying cry in the EU27.[7] First, since the British referendum, there has been great political uncertainty due to the difficulties in getting the withdrawal agreement passed in the United Kingdom (i.e. several successive rejections by the House of Commons) and the political and constitutional crisis in the British political system.[8] These difficulties have increased support for EU membership.[9] Second, a majority of public opinion opposes leaving the EU or the euro zone due to fears about the economic and financial consequences.[10] The most recent opinion polls show that there is broad support for the euro in EMU member countries (Figure 4). 75 per cent of respondents in the euro area are in favour of the single currency and only 20 per cent are against it. Among the member states of the euro area, support is rising. It is lowest in Italy (63 per cent, a two percentage point increase) and highest in Slovenia (86 per cent, a two percentage point increase).[11] 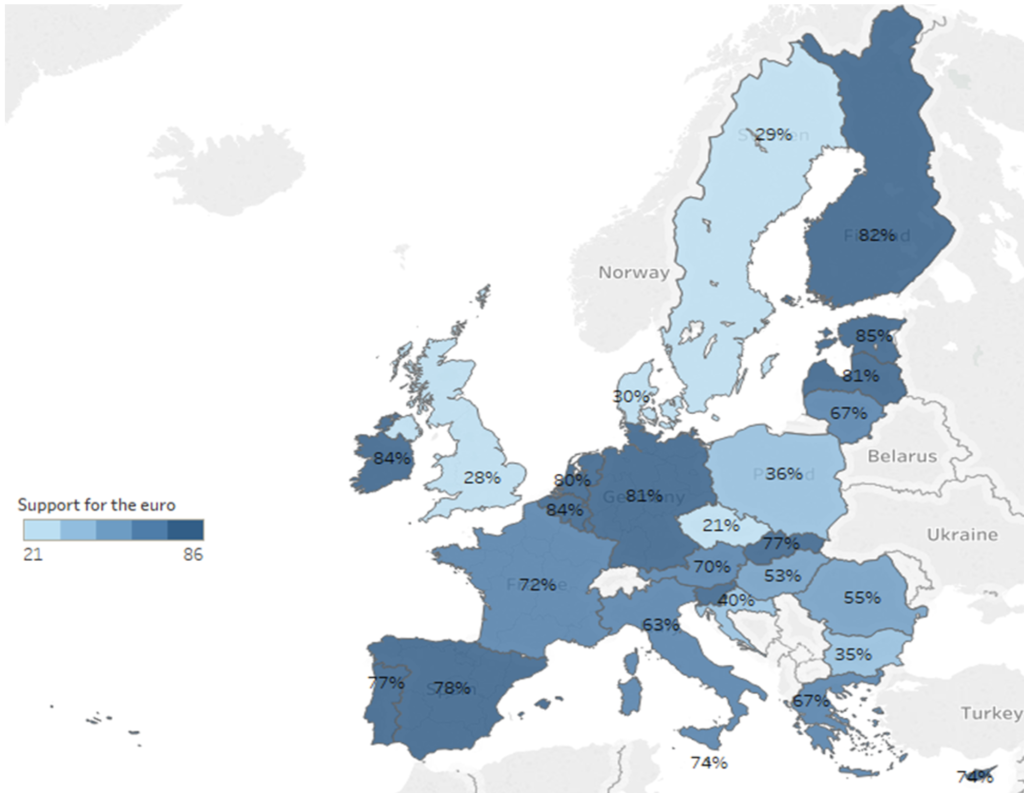 Moreover, although stricter immigration control was a top priority for pro-Brexit political forces during the 2016 referendum campaign (notably by UKIP, then led by Nigel Farage), opinion polls suggest that a majority of voters in the EU27 member states think that the regulation of migration flows requires solutions at the European rather than national level (Figure 5).[12] One of the consequences of the 2015 refugee crisis is a growing awareness that border control has become a European public good. Figure 5 shows that a majority of Europeans are in favour of a common European migration policy.

Figure 5 ▪ Europeans in favour of a common immigration policy 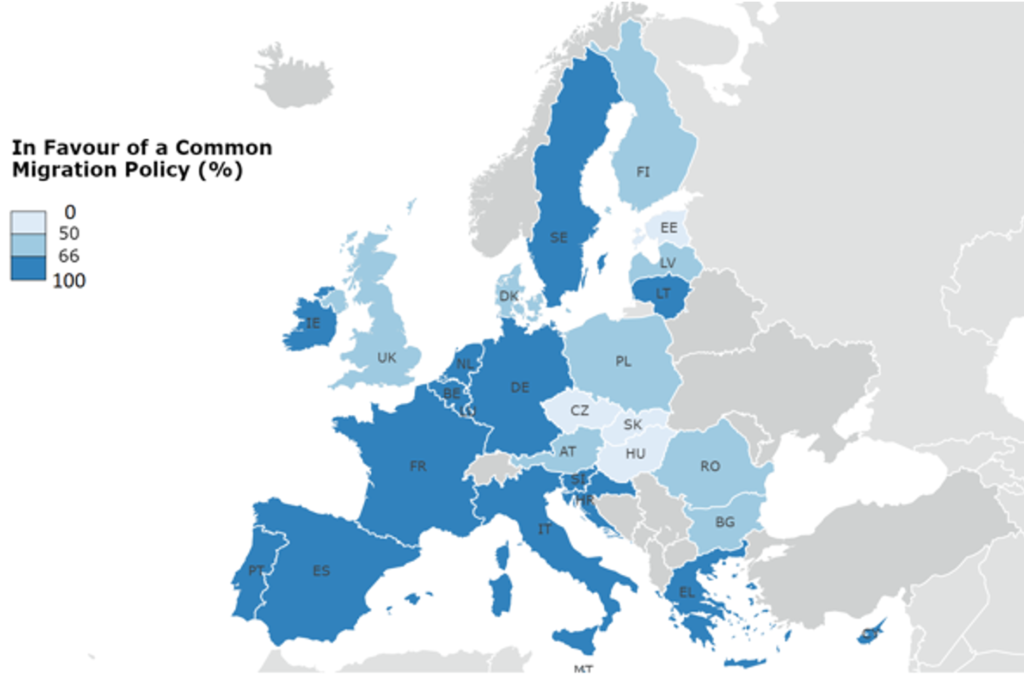 Three conclusions can be drawn for the effect of Brexit on public opinion in the EU27. First, immigration is a factor with much greater impact on euroscepticism in the EU27 than Brexit. Second, a majority of voters in the EU27 think that they get more benefits from belonging to the EU and the euro area than from being on the outside. Third, not only did Brexit have a limited effect on euroscepticism, but public opinion in all member states has become more favourable to EU membership after the British referendum. So, to some extent, the Brexit negotiations have helped to reconfigure European public opinion in favour of integration. And this is the paradox of Brexit: on the one hand, it is a force of disintegration; but on the other, Brexit has reinforced the preferences of other member states to remain in the EU. The domino effect that some feared at the beginning of the Brexit process did not arrive.

[1] The following discussion is based on a research paper that is planned for publication in 2020 under the title “Disintegration Reversed: Brexit and Cohesiveness of the EU27” in the British Journal of European Contemporary Studies.

[5] Concerning the French case, see the recent data presented by the Kantar Centre on the Future of Europe, ‘Brexit: Perceptions from Europeans’, October 2019. The study was conducted in France, Germany, Poland, Spain, the Republic of Ireland and the Netherlands. 24 per cent of respondents in France are in favour of leaving the EU if a referendum is held, while 52 per cent are in favour of remaining in the EU, which is the lowest support rate for EU membership among the countries included in the study.