Who are our Members of the European Parliament? 1/4

As the 2024 European elections are appearing on the horizon, the Jacques Delors Institute is launching a series of MEP profiles written by Christine Verger, Vice-President of the Institute.

Of different nationalities and political leanings, they make up the beating heart of an institution that is still not sufficiently known. Through their activities and influence, they enhance a still burgeoning European democracy. 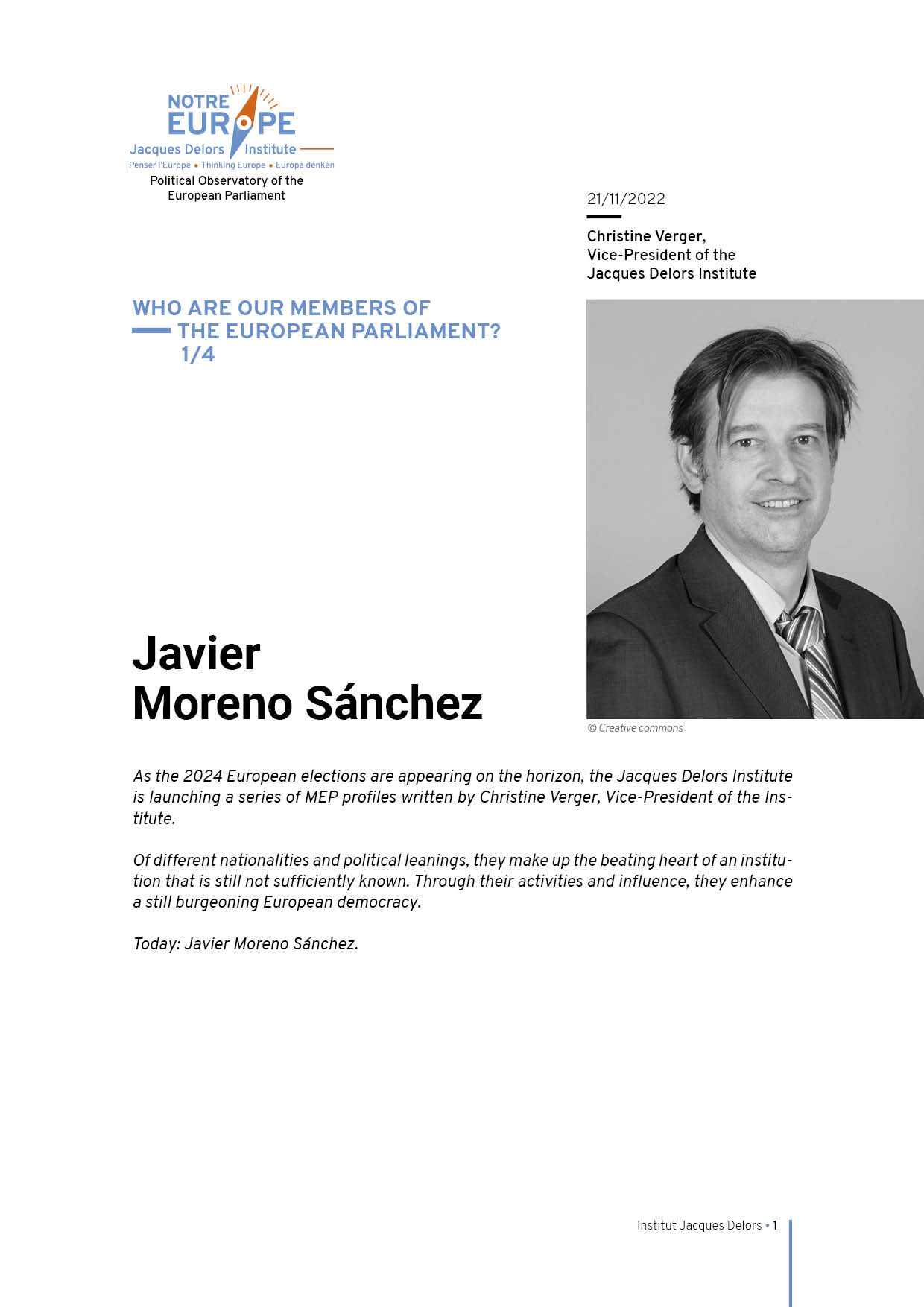 In Spain, each person has a double name; a child’s first surname is the father’s surname and the second surname is the mother’s. This has been the tradition for centuries.

His father left Spain in 1961, due to the economic and political situation in the country, and moved to Switzerland, like thousands of other Spaniards. The country needed a labour force and he was able to obtain legal employment as an electrician, enjoying the same rights and wages as Swiss citizens, and having access to the same public services. His mother was a seamstress and still is today.

Spain was the country for holidays and family get-togethers.

Javier Moreno Sánchez is a pure result of meritocracy: he completed his university studies at the International Relations Institute in Geneva, because he was already interested in issues concerning Europe and Latin America. Geneva was a prime location for these studies, due to the presence of major international bodies.

He was then accepted on an internship at the European Commission in Brussels.

There began a period of active presence and advocacy in European institutions, the European Parliament in particular, that continues to this day.

Starting out as an assistant to Enrique Baron, who had just completed his term as President of the European Parliament and was Chairman of the Committee on Foreign Affairs, Javier became deputy Secretary-General of the Party of European Socialists, after sitting an internal competitive exam for the socialist parliamentary group. There, he took part in work on the future “European Constitution” with Giuliano Amato, former Italian Prime Minister and Vice-President of the Convention on the Future of Europe. This is also where he played a role in the creation of European political parties, the statutes and budget for which were adopted in 2004.

For him, European and national policies have always been intrinsically linked, even though MEPs primarily sit by political groups (EPP, Socialists, Liberals, Greens, etc.).

National delegations are only informal structures within the groups, which work to raise awareness of the issues important to their country and their party. The necessary compromises are then reached to draw up a common position for the group in debates and votes held by the European Parliament as a whole. We must remember that the Parliament operates by seeking compromise between groups, as no political group holds the majority on its own.

Javier Moreno Sánchez’s career supported the European Parliament’s growing influence in the EU’s institutional structures. Currently joint decision-maker with the European Council of Ministers in a wide range of areas of European legislation, the Parliament also has oversight of the Commission and elects its members.

The many responsibilities of the Spanish MEP include those he exercises within the European Parliament’s Committee on Civil Liberties, Justice and Home Affairs.

The issue of immigration is a common thread in his work, due to his drive to make progress with cases of legal immigration.

He was rapporteur for the revision of the “blue card” directive which had been blocked at the Council for years, due to a lack of political will. This directive defines the conditions for entry and residence that citizens of third countries must fulfil to occupy a highly skilled position in Member States, and was adopted in 2021 as part of a “joint decision” process with the Council.

He is currently the rapporteur for the revision of the “single permit” directive which concerns access and residence conditions for third-country nationals in Member States, and is preparing to enter into negotiations with the Council on behalf of the Parliament.

He is a member of the working group with oversight for Frontex, the European Border and Coast Guard Agency. The agency’s budget is voted by the European Parliament and has risen significantly in recent years.

He is also an active member of the Committee on International Trade. A permanent rapporteur for CETA, the economic and trade agreement between the European Union and Canada, he takes part in what is known as “parliamentary diplomacy”. The agreement, signed but only provisionally and partially applied, has not been ratified by all countries, including France. As the EP has ratified the agreement (it has a right of veto over trade agreements), Javier Moreno Sánchez works with other members of his committee who are also members of the delegation with the Canadian Parliament to convince his counterparts in national parliaments as he believes the agreement offers added value and opportunities, particularly for SMEs. Javier Moreno Sánchez is known for his ability to find compromises, to forge personal ties with those he meets and to deal with complex situations.

Javier Moreno Sánchez is also President of the friendship group with Cuba, and Vice-Chair of the Intergroup on Children’s Rights.

As head of the Spanish socialist delegation, he maintains the relationship between his party (he is a member of its executive board) and counterparts on a European level. All governments, especially in Spain, in which Prime Ministers remain party leaders, closely monitor the activities of European institutions, including the EP. For example, the situation in Ukraine and the decisions and direction taken on a European level interest Spain particularly as it hosts more than 100,000 Ukrainian refugees.

Javier Moreno Sánchez’s family has lived in Brussels for a long time, as he has held various permanent positions in the Belgian capital. As MEP, he shares his time between Brussels, where the parliamentary committees meet, Strasbourg, three or four days a month for the Parliament’s plenary session and Madrid, for party meetings. He also travels regularly in Europe in line with his many parliamentary activities. An increasing number of MEPs are setting up their main residence in Brussels (their number is estimated at 250-300 out of 751), in order to make family life easier. This is a concern for the French authorities which are committed to keeping the Parliament’s headquarters in Strasbourg.

Like all MEPs, he has assistants (within the limits of the budget defined by the Parliament), i.e. two “accredited” assistants located in Brussels who report directly to the Parliament’s administration. As head of the Spanish socialist delegation at the European Parliament, he also has a secretariat specific to this delegation.

Through all these activities, Javier Moreno Sánchez shows enthusiasm and a sense of compromise and general interest. He may not be the only person with these qualities, but he contributes to making the Parliament a key stakeholder in European life.