After the conclusion of negotiations between the twenty-seven EU Member States and Boris Johnson’s government on the UK’s EU withdrawal agreement, Brexiteers seem to finally be on the verge of achieving their goal.[1] In 2016, a majority of British citizens, in particular in England, decided that their country should leave the European Union. The deal that was patiently negotiated by Theresa May and the twenty-seven Heads of State and Government of the other EU Member States was not ratified by the British Parliament, which had become more fragmented than ever. None of the motions submitted to a vote (soft Brexit, reconsideration of Brexit, customs union, second referendum) obtained a majority. Prime Minister Boris Johnson now defends–together with his closest advisers (first and foremost Dominic Cummings)–the option of a hard Brexit according to which the UK’s economic model should transition to a ‘Singapore-on-Thames’ to achieve success outside the EU.[2] In such a context, the question if Brexit will succeed is more acute than ever.[3]

What is the objective of Brexit: Global Britain or isolationism?

During the referendum campaign, two seemingly contradictory political visions could be found amongst ‘Leave’ supporters. The first is isolationism, fuelled by fear of immigration and the quest for sovereignty, reinforced by the influx of refugees. In fact, many Brexit supporters have been confused about freedom of movement in Europe and immigration from beyond the EU’s borders.[4] The second vision is that the United Kingdom should become an advocate for free trade and an offshore centre for finance. Supported by the memory of the empire and the good health of the Commonwealth, as well as the desire to preserve its claimed status as the world’s leading financial centre, it affirms the global vocation of the United Kingdom (Global Britain), which European regulatory constraints supposedly hinder. The two visions, isolationism and globalism, are based on political and identity-based logic rather than economic and utilitarian rationale. And their contradictions are apparent: Leave supporters dream of making the United Kingdom a ‘great Switzerland’, open to foreign capital and competition, but closed to immigration, and unconstrained by undesirable European rules.[5]

But it is far from certain that the majority of British citizens who voted in favour of Brexit want the United Kingdom to turn into ‘Singapore-on-Thames’. The decision to leave the EU only became possible because a majority of British citizens thought there were national alternatives to EU membership.[6] For all Brexiteers, this meant to return full control to the national parliament over all decisions applying to the United Kingdom. The same voices then express frustration with the role of the UK Parliament (just until the prorogation of Parliament was invalidated by the Supreme Court). For neoliberal Brexiteers, it would allow for a shift to a global economic model, a ‘Singapore on Thames’. For leftist Brexiteers, this meant a return to a purely national welfare state in which the former British contribution to the European budget would be transferred to the national budget. This is in line with the idea that the Labour Party, if it came to power, could more easily implement its programme once it had rid itself of the ‘neoliberal treaties’ on which the EU is based.[7]

The dominant narrative among Brexiteers was therefore mainly political, emphasising the themes of immigration, sovereignty and isolationism (see Figures 1 and 2). In addition, economic reasoning was mainly invoked by ‘Remainers’. When Leave supporters discussed economic implications, they defended the need to rebalance between the City, which took advantage of the country’s membership in the EU, and those who failed to make the most of European and international economic and financial openness. In this respect, it is striking to see to what extent the issue of inequality has played an important role in the economic discourse surrounding Brexit. Many would like to see the United Kingdom become less open than in the past; British farmers and fishermen seem to want less competition rather than more.

Figure 2 ▪ The themes that influenced the votes by Brexiteers, Remainers and the undecided 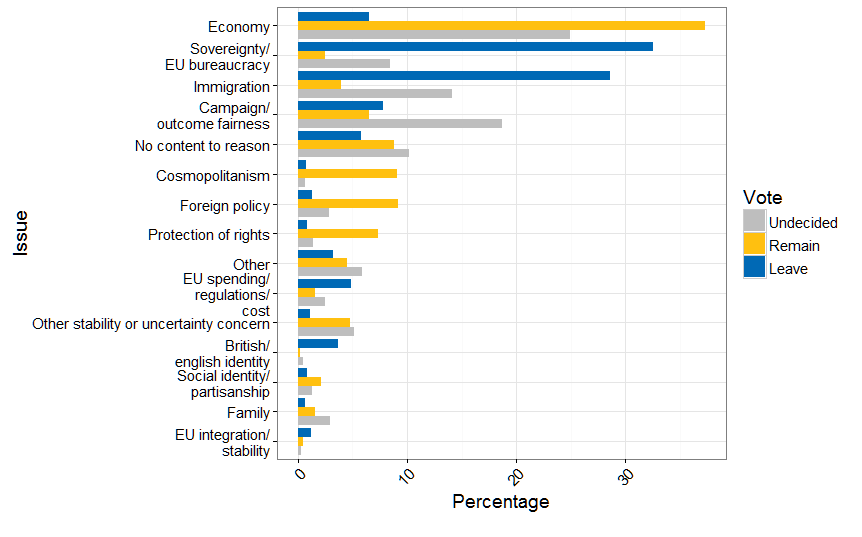 The blindness of hard Brexiteers

Several elements highlight the blindness of many Brexiteers as to the inability of their hard line being imposed on others. 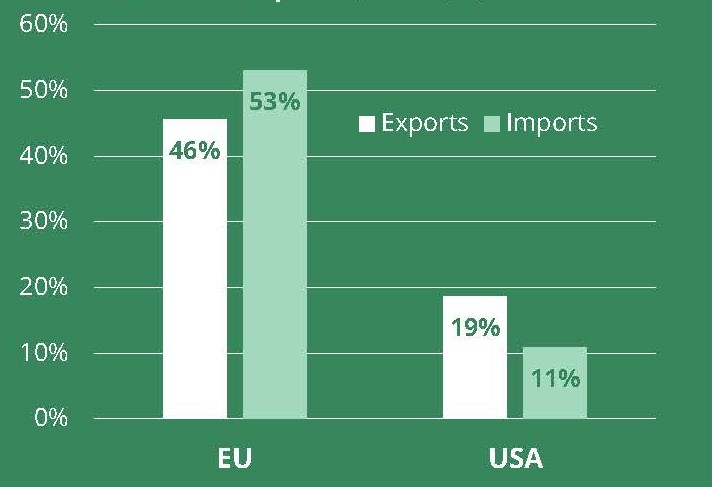 Negotiations on trade agreements with major powers such as the United States, China and India will be long, and tough for the United Kingdom once it is outside the EU. Negotiating alone puts it in a much less favourable position than negotiating as a Member State of the EU. Given the new power differential that would result from a hard Brexit, it is likely that access to the UK market for US agricultural and agri-food products would have a negative impact on British farmers who would not necessarily benefit from the trade. If some sectors (such as financial services and hedge funds) can benefit from this new situation, it will also result in losers and involve costs for other sectors.

Second, access to a country’s market is provided under a compensation logic which involves third countries. For example, Poland has an interest in opening its market to British companies as long as the United Kingdom allows Polish workers access to its market. China and India will not give more favourable market access to the United Kingdom than to the EU, if London does not relax its visa policy towards Chinese and Indians. Japanese companies are closing sites in the United Kingdom to repatriate them to Japan in order to avoid the uncertainty of Brexit and because of the free trade agreement negotiated by that country with the EU. With regard to taxation, the ‘Singapore-on-Thames’ scenario could also lead London to deploy very aggressive tax competition strategies against its former European partners. But a non-cooperative and combative tax strategy would ignore a number of realities: tax competition is already possible within the EU (as showcased by Ireland and Luxembourg); all Member States are in the process of lowering their corporate tax rates (as is the case in France, for example).

Third, would other EU Member States allow this to happen by turning a blind eye? The European (including British) reaction to the United States on taxing multinational technology companies illustrates that this is not obvious. Last but not least, such a tax strategy would involve financial costs for the financing of the British public sector and therefore political and social cost due to the increase in resulting inequalities. Is this really the choice of a majority of British citizens who voted for Brexit?

Can ‘Singapore-on-Thames’ be a model?

The ‘Singapore-on-Thames’ narrative has to be questioned at the political, economic and social level. Politically, it should be recalled that Singapore is governed by an authoritarian and clan-based regime (around a few families) in which there is no democratic competition. Economically, Singapore is not only a major financial centre and its growth has been over-determined by its geographical location: Singapore has a world-class port with logistics, trading and refining activities. Conversely, ports in the United Kingdom are underdeveloped compared to those in the EU, particularly in Antwerp and especially Rotterdam. The comparison with Singapore therefore has its limits; we are not talking about the same economy. London is not Singapore and the United Kingdom is not just London; if that had been the case, the United Kingdom would have remained within the EU.

In addition, the comparison with economically prosperous non-EU European countries must be put into perspective. Switzerland, for example, is currently renegotiating its bilateral agreements with the EU, which are not considered satisfactory by either side. Norway is a member of the European Economic Area.[8] It should also be noted that GDP growth in these countries has been lower than that of the United Kingdom (as an EU Member State), the EU, and the euro area over the past 20 years.

Despite all this, vigilance is required. Europeans may fear the emergence of a British competitor that, through low taxation, lower standards, lower costs and free ports, attracts companies from the continent. The Singapore model will beguile and find its followers in the EU. European negotiators for the future trade agreement between the Union and the United Kingdom must bear this risk in mind. 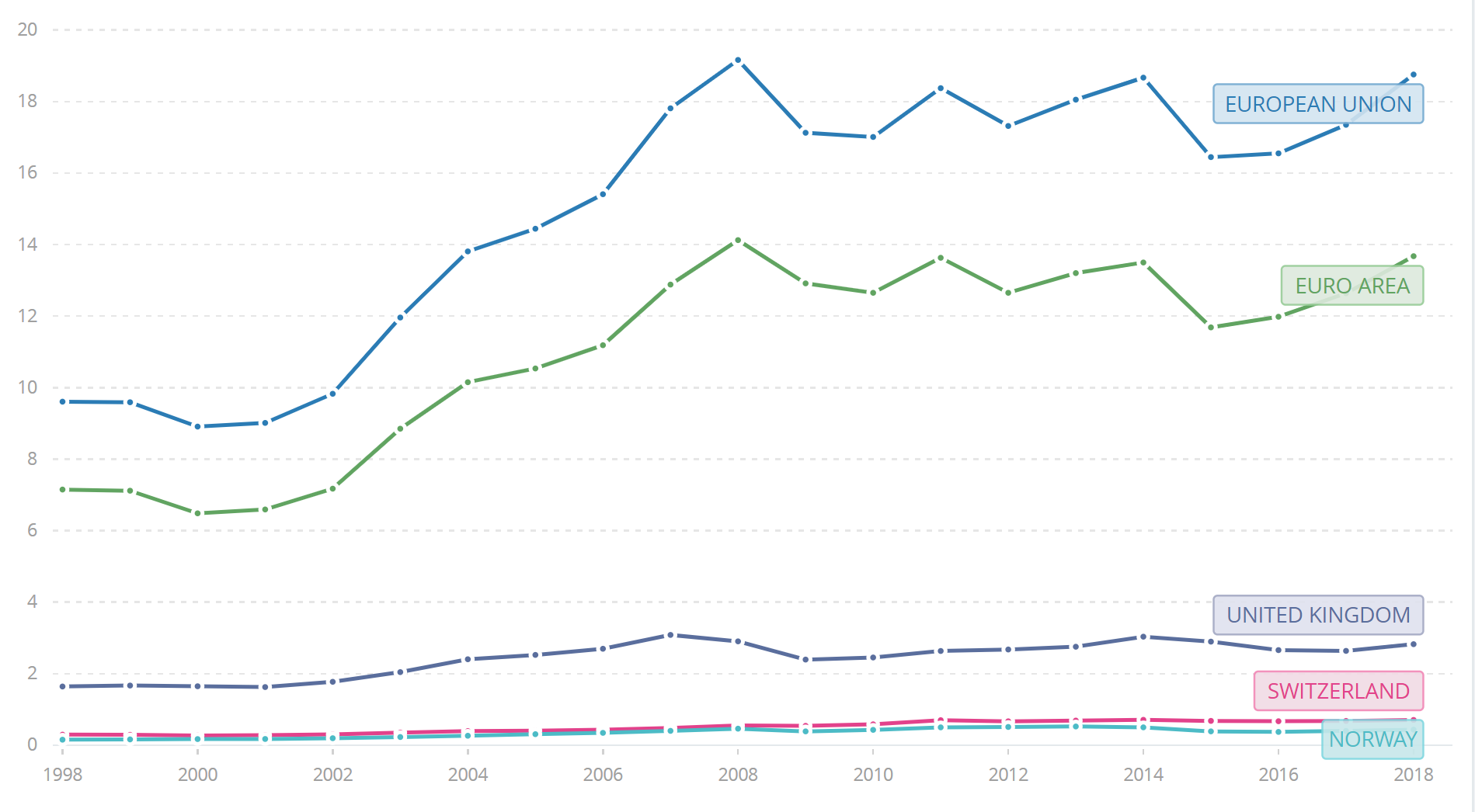 The United Kingdom’s growth forecasts are also falling in anticipation of its exit from the EU.[9]

Figure 6 ▪ Gross Domestic Product (GDP) growth forecasts for the United Kingdom (UK) from 2019 to 2023, by institutions 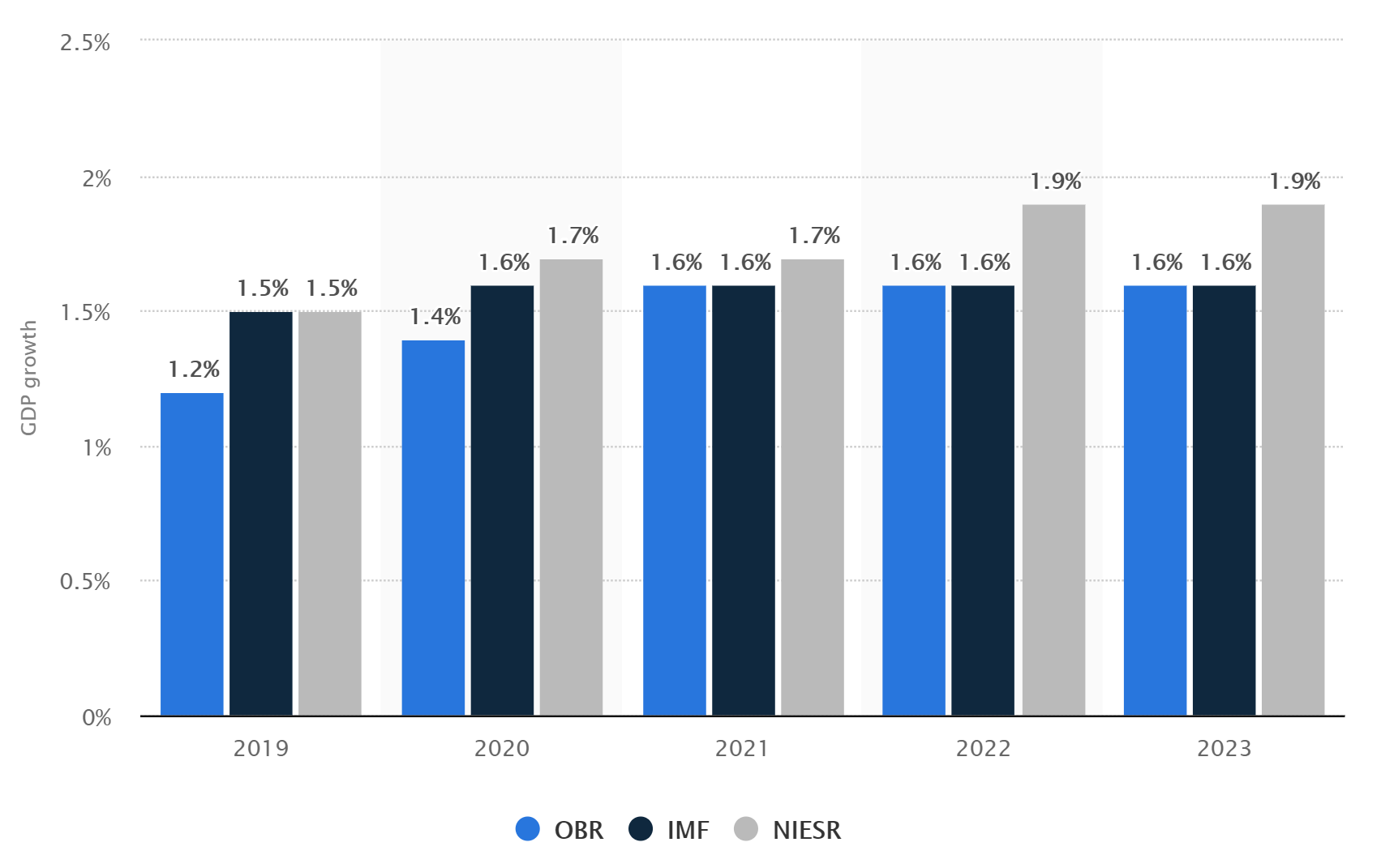 The neoliberal strategy of financial deregulation, led by Margaret Thatcher, has been successful but it occurred within the framework of the EU market that favours financial services. The City is the financial centre for the euro (the second most traded currency in the world) and will remain an important financial centre. But the United Kingdom will lose the financial passport to serve the euro zone from London and the euro zone will condition access to its financial services market on the equivalence of UK and EU regulations in areas where these possibilities are provided for by European legislation.

Finally, the scenario of making London a ‘Singapore-on-Thames’ implies a reduction in taxes, which raises the question of financing public expenditure and in particular the UK’s National Health Services. Although this would not pose any problems for the Conservatives, left-wing Brexiteers may have a different view… The dilemma facing the British is therefore the following: become a poorer and more unequal country but make decisions under complete sovereignty? This dilemma must be resolved by the British, who, beyond partisan cleavages, will also be divided on the issue between the United Kingdom’s constituent nations, particularly in the case of Scotland.

The Brexiteers could finally succeed. Since the referendum, the likelihood of an exit has never been higher. But will Brexit succeed? Probably not, or else it will cause many losers, including those who voted to leave the EU and could turn bitter. The resulting frustration, resentment and anger will only increase the rise of populism in the form of both nationalist and neo-liberal populism on the one hand and left-wing populism on the other. It is obvious that neither the English, nor the British, nor the Europeans would have anything to gain from such a scenario.

Thierry Chopin, Professor of Political Science at the Catholic University of Lille (ESPOL),
Special Advisor at the Jacques Delors Institute

Translation from French by Nicolas Köhler

[1] I would like to thank Jean-François Jamet. Our exchanges and discussions on this subject have been of great value. I would also like to thank Micol Bertolini for his documentary research.

[4] It should be noted here that some in the UK (particularly those from Commonwealth backgrounds) see Brexit as an opportunity to address the perception that nationals from the rest of the world are treated unfairly in comparison to EU citizens when trying to obtain the right to work and live in the United Kingdom.

[8] The Agreement on the European Economic Area, signed on 2 May 1992, extended the EU’s internal market to the Member States of the European Free Trade Association, with the exception of Switzerland, which has not ratified the agreement. It therefore includes the EU Member States as well as Norway, Iceland and Liechtenstein. While not belonging to the EU, these states benefit from the free movement of goods, persons, services and capital and must apply the relevant European rules without participating in their development or in the decision-making process. They also participate in certain EU programmes (e.g. research, education, environment and cohesion) and contribute to them in proportion to their GDP. However, they do not participate in tax policy, agricultural and fisheries policy or trade policy towards third countries.