Our peace project has inspired and achieved change that many thought was impossible. Europe is hope. Hope in the future. The hope of seeing our freedoms prevail. Hope to move forward and inspire change. This was the message of the President of the European Parliament Roberta Metsola while addressing the Jacques Delors Conference in Paris on ‘Democratic values in the EU and the promise of peace that is central to European integration’. 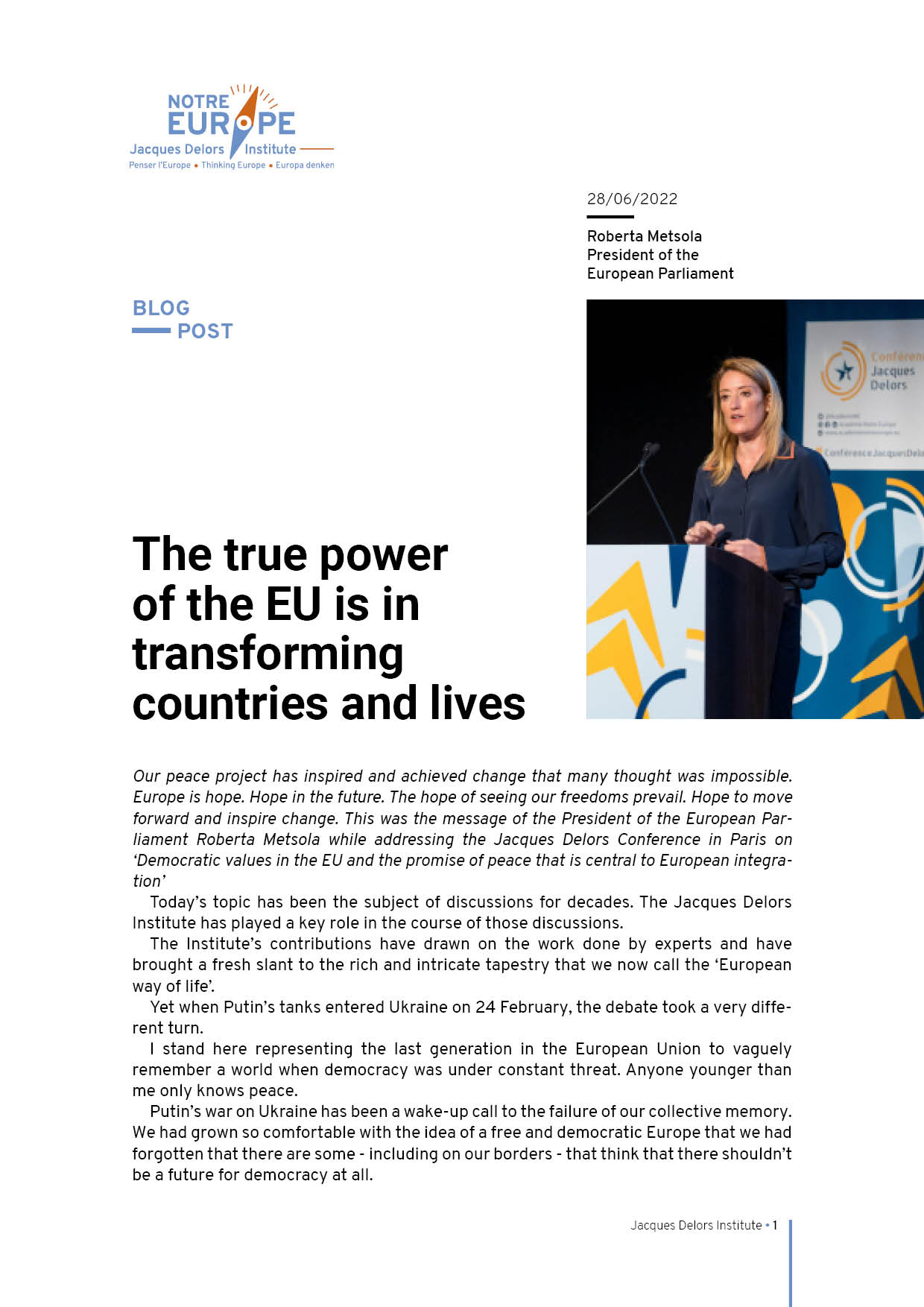 Today’s topic has been the subject of discussions for decades. The Jacques Delors Institute has played a key role in the course of those discussions.

The Institute’s contributions have drawn on the work done by experts and have brought a fresh slant to the rich and intricate tapestry that we now call the ‘European way of life’.
Yet when Putin’s tanks entered Ukraine on 24 February, the debate took a very different turn.

I stand here representing the last generation in the European Union to vaguely remember a world when democracy was under constant threat. Anyone younger than me only knows peace.

Putin’s war on Ukraine has been a wake-up call to the failure of our collective memory. We had grown so comfortable with the idea of a free and democratic Europe that we had forgotten that there are some – including on our borders – that think that there shouldn’t be a future for democracy at all.

Our collective judgement, as a response to growing interdependence between the world’s nations – whether that relates to our economies, our climate ambitions or even the provision of energy supplies – has been clouded with naivety. A naivety that led us to believe that Europe’s way of conducting business through dialogue and exchange would naturally extend to our hostile neighbours.

The warning signs were there. The Baltics, Finland, Poland have been warning us for years. We saw the backsliding of democracy in Russia, hybrid attacks on our democratic processes, what happened in Crimea, what they did to Navalny, how they tried to crush democracy in Belarus, and yet when Putin’s revisionist ideology was matched by his army, we let it be surprising.

It should not have been surprising.

Ukraine and its people have been battling a brutal and illegal war for 129 excruciating days. As Russian bombs continue to kill indiscriminately, as the Russian army continues to rape Ukrainian women, as millions of Ukrainians have fled their country and will continue to do so, Ukraine is today looking to Europe for support.

These are not words that can just be cast aside because they no longer suit us. We have maybe done that because we took them for granted. But Ukrainians today know and they have known for a long time – perhaps even before we could admit it to ourselves – that our European project is the largest force that stands in the way of Putin’s revisionist past of spheres of influence, vassal states and an iron curtain.

On the 24 February, we woke up belatedly to the realisation that Ukraine’s fight is Europe’s fight.

Last week, the European Council took an unprecedented decision to grant EU candidate status to Ukraine and to Moldova, in what has become a watershed moment for European integration.

I have no doubts about what happened last week, which was not at all taken for granted not only back in January when I started my mandate, but even 5/6 weeks ago, when I would not have thought that Ukraine and Moldova would be candidate countries of the European Union. I was around that table last week in the European Council. I thought it would be more difficult to get through, but in the end there was an immediate understanding around that table that we needed to prove to Ukraine, to Europe, to our citizens as elected representatives, and the world, that no decision is too difficult to take when our values are being called into question.

This show of unity has strengthened us in terms of our geopolitical security situation, and it has also strengthened Ukraine and every country that looks to Europe as that bastion of protection and democracy that it has always been.
The next steps will be crucial and very difficult. As war fatigue will inevitably set in, it is our responsibility to ensure that we do not again become complacent.

This is why we must double down on our efforts to support Ukraine while also taking stock of this fundamental shift in geopolitics.

This is why we must look at the way that we engage with autocrats and we must change the way we look at them. Because our founding mothers and fathers worked too hard to forge a system to make any return to the horrors of war impossible.

It is up to us to defend the rules and values-based order that we stand for. We need to cement an inter-dependent relationship between nations and people who are proud of their differences, but who understand that in this new world, the future can only be together. And that means that we have to understand that interdependence is inevitable, while we also need to grasp our responsibility in international fora.
The responsibility is on us now. We, as Europe, can no longer say somebody else can do that. Because what we have seen is that either that other power didn’t come in or any other irresponsible or unpredictable, or autocratic powers with malign thoughts and ideas as to what they can do with countries that are waiting to join the European Union and have been waiting for decades even though they have been promised year in, year out, elections have been fought and lost on this in those countries, that the door will be open to them.

As Jacques Delors himself famously put it 30 years ago: “If we are to resist the forces of fragmentation, protectionism and exclusion, we must be more than just aware of our interdependence. We must move on and manage it, setting common objectives and applying common rules”.

Ladies and gentlemen, a new paradigm must be set whereby the European Union must own and shape its own destiny, irrespective of the threat to our east. We must be ambitious and courageous enough to develop a long-term strategy. One that enables us to take a quantum leap to protect our values. The unity that we have exhibited as a Union and beyond must remain our blueprint going forward.

We must never forget that Europe has the power to transform countries and lives. Our European peace project may not be perfect, but it has inspired and facilitated changes that many thought impossible.

I know that we can continue to progress.

I know that we can continue to inspire. 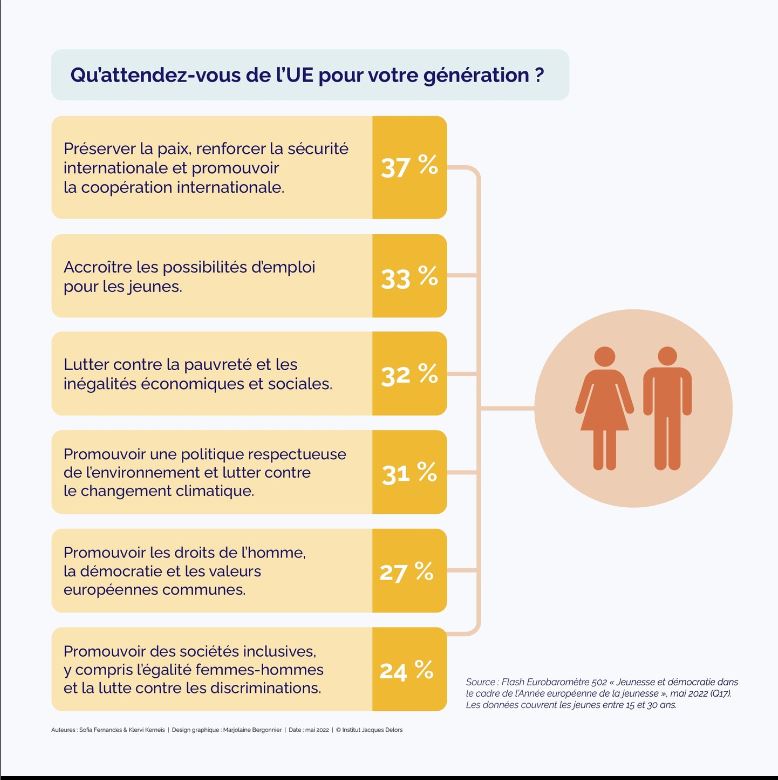 Saint James conversations : What will we do with Europe? [FR]

FOR A EUROPE OF CULTURE AND HERITAGE: FROM WORDS TO DEEDS [FR]