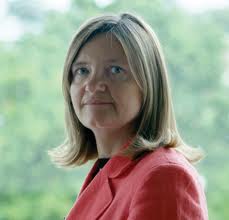 PhD Brigid Laffan took office as the Principal of the College of Human Sciences, University College Dublin in September 2004. She was appointed as Jean Monnet Professor of European Politics in the Department of Politics, UCD in 1991. She was the founding Director of the Dublin European Institute UCD in 1999. In March 2004, she was elected as a member of the Royal Irish Academy. She is a member of the Research Council of the European University (EUI) Florence, the National Economic and Social Council (NESC) and the Irish Government’s High Level Asia Strategy Group. Professor Laffan is author of Integration and Co-operation in Europe, 1992, The Finances of the Union, 1997 and co-author of Europe’s Experimental Union 2000. She has published numerous articles in the Journal of Common Market Studies and the European Journal of Public Policy. Professor Laffan co-ordinated a six

country cross national research project Organising for Enlargement (2001-2004), financed by the EU Commission’s Fifth Framework Programme and is part of an integrated research project on New Governance in Europe.