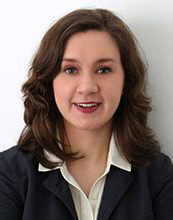 Dr.
Katharina Gnath is Senior Project Manager at the Bertelsmann Stiftung
and coordinates the Liaison Office for the research project “Repair and
Prepare: Strengthening the Euro” at the Jacques Delors Institut –
Berlin.

Katharina is an expert on European and international economic
governance and is currently conducting research on the governance of the
euro zone and the political economy of economic reforms in Europe.

She
previously held fellow positions at Stiftung Neue Verantwortung and the
German Council on Foreign Relations (DGAP) in Berlin and was a member of
the “Think 20” advisory team of Australian G20 Presidency in 2014.
After her studies Katharina was a trainee at the European Central Bank
in Frankfurt and taught in the master´s program at the Hertie School of
Governance.

Katharina holds a PhD from the Free University and the
Hertie School of Governance in Berlin on the external relations of the
euro zone in international financial institutions. She studied
Philosophy, Politics and Economics at Oxford University and holds a
Masters degree in European Politics from the London School of Economics
(LSE).

Her studies were supported inter alia by the Fritz Thyssen
Stiftung, the DAAD, and the Fox Fellowship at Yale University.