While the crisis of the “sovereign debts » stimulates a debate which focuses mainly on the technical solutions to be promoted, Yves Bertoncini underlines that it is first a “crisis of sovereignties”. He tries to identify the mains political issues at stake (loss of sovereignty, federalism, democracy, etc.) on the basis of four complementary statements. 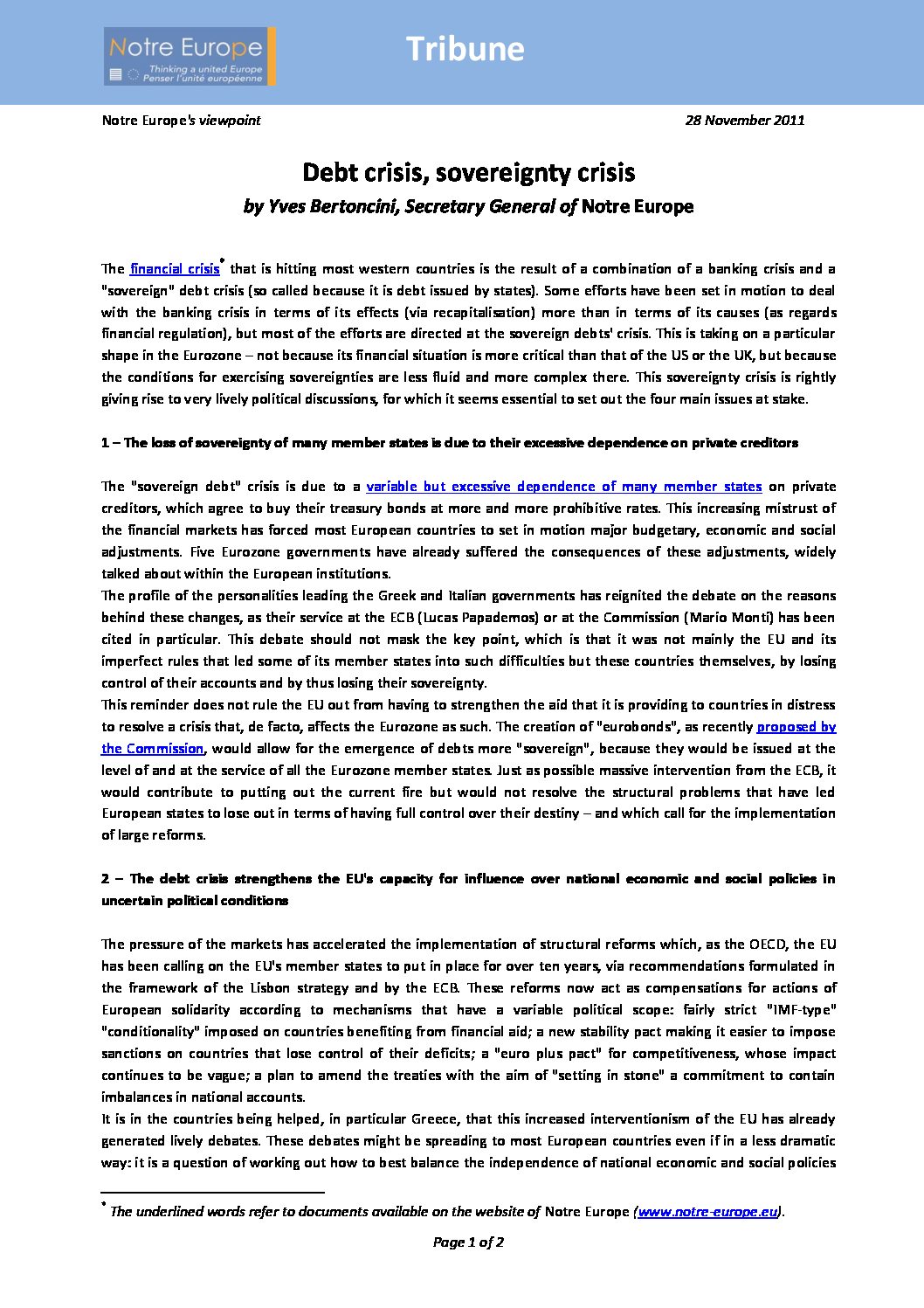 The financial crisis that is hitting most western countries is the result of a combination of a banking crisis and a “sovereign” debt crisis (so called because it is debt issued by states). Some efforts have been set in motion to deal with the banking crisis in terms of its effects (via recapitalisation) more than in terms of its causes (as regards financial regulation), but most of the efforts are directed at the sovereign debts’ crisis. This is taking on a particular shape in the Eurozone – not because its financial situation is more critical than that of the US or the UK, but because the conditions for exercising sovereignties are less fluid and more complex there. This sovereignty crisis is rightly giving rise to very lively political discussions, for which it seems essential to set out the four main issues at stake.

The “sovereign debt” crisis is due to a variable but excessive dependence of many member states on private creditors, which agree to buy their treasury bonds at more and more prohibitive rates. This increasing mistrust of the financial markets has forced most European countries to set in motion major budgetary, economic and social adjustments. Five Eurozone governments have already suffered the consequences of these adjustments, widely talked about within the European institutions.

The profile of the personalities leading the Greek and Italian governments has reignited the debate on the reasons behind these changes, as their service at the ECB (Lucas Papademos) or at the Commission (Mario Monti) has been cited in particular. This debate should not mask the key point, which is that it was not mainly the EU and its imperfect rules that led some of its member states into such difficulties but these countries themselves, by losing control of their accounts and by thus losing their sovereignty.

This reminder does not rule the EU out from having to strengthen the aid that it is providing to countries in distress to resolve a crisis that, de facto, affects the Eurozone as such. The creation of “eurobonds”, as recently proposed by the Commission, would allow for the emergence of debts more “sovereign”, because they would be issued at the level of and at the service of all the Eurozone member states. Just as possible massive intervention from the ECB, it would contribute to putting out the current fire but would not resolve the structural problems that have led European states to lose out in terms of having full control over their destiny – and which call for the implementation of large reforms.

The pressure of the markets has accelerated the implementation of structural reforms which, as the OECD, the EU has been calling on the EU’s member states to put in place for over ten years, via recommendations formulated in the framework of the Lisbon strategy and by the ECB. These reforms now act as compensations for actions of European solidarity according to mechanisms that have a variable political scope: fairly strict “IMF-type” “conditionality” imposed on countries benefiting from financial aid; a new stability pact making it easier to impose sanctions on countries that lose control of their deficits; a “euro plus pact” for competitiveness, whose impact continues to be vague; a plan to amend the treaties with the aim of “setting in stone” a commitment to contain imbalances in national accounts.

It is in the countries being helped, in particular Greece, that this increased interventionism of the EU has already generated lively debates. These debates might be spreading to most European countries even if in a less dramatic way: it is a question of working out how to best balance the independence of national economic and social policies and the effective respect of joint strictures related to sharing the same currency. These debates are likely to crystallise around European control of states’ budgets, especially if it intervenes ahead of the national parliaments’ votes – but also on the equity of the reforms undertaken, which is an almost entirely national issue These debates are essential from a symbolic and practical point of view. But it is important to address them with the awareness that the EU is not going to convert its OECD-type recommendations into IMF-type injunctions in one go, because its legitimacy to “impose” reforms would then be likely to remain unlimited outside the period of the crisis – that’s why a more integrated coordination could take place between a limited number of volunteer countries.

3 – The calls for more European intervention understandably relaunch the debate about federalism, which is paradoxically focused on the role of the ECB

First paradox: this debate recalls the fact that the EU is already a federation, which appears not as a myth, either desirable or denounced, but as a useful political tool, based on the joint exercise of some competences (for example in trade or monetary issues) and on the intervention of federal institutions such as the Court of Justice or the ECB.

Second paradox: the massive intervention of the ECB as the lender of the last resort is being presented as the most effective solution to deal with the crisis by a number of actors and commentators; but the same people often refuse any federal future in economic or budgetary terms.

Third paradox: as with other federations, the EU is governed by treaties, which are often negotiated and ratified with great difficulty and which act as a “marriage contract” which one cannot free oneself from without political and psychological damage. These treaties stipulate that the ECB is independent and that it therefore has a vocation to act as it deems useful, to fight against inflation, which has an impact on the growth, competitiveness and social cohesion of European countries, as well as to preserve the financial stability of the Eurozone: it has done up until now, including against the opinion of countries presented as being very influential, such as Germany, without satisfying countries presented as being very demanding, such as France.

The change of government brought about in several countries in difficulty has taken place after elections (Ireland, Portugal and Spain) or just before them, after three months of interim government (Greece). In Italy, this change came about after a vote of no confidence by the parliament which then widely backed Mario Monti – with the next elections to be held, at this stage, in mid-2013. The formal rules of parliamentary democracy have therefore been respected in these five countries. Opinion polls at this stage underscore the legitimacy of the Greek and Italian governments, despite the understandable discussions which followed their arrival.

Democratic rules must also be respected in the countries called on to finance European aid plans, which give rise to legitimate controversies. These controversies brought down the Slovak government and have shaken up several coalitions in power, for example in Germany, faced with public opinions that are sometimes hostile and under the logical supervision of national parliaments. Taking account of everyone’s positions while trying to have a better understanding of their doubts and anxieties also contributes plenty to the democratic handling the ongoing crisis.

It is probably also inevitable that this “sovereignty crisis” will lead European and national leaders to have to show leadership capacities allowing them to convince or to defy their public opinions. It is also perhaps inevitable to have to wait again for “necessity to be the mother of laws”, in a federation of nation states whose states and peoples are struggling to agree to come up with decisions that are beneficial both at the national and European levels.