Defence: The French ambition for Europe

As the Commission on the French White Paper on Defence and National Security hands in its report to the president of the French Republic, Nicole Gnesotto and Sophie-Caroline de Margerie give us their thoughts on the future of national defence and on the French ambition for Europe, and analyse the consequences of American military redeployment. 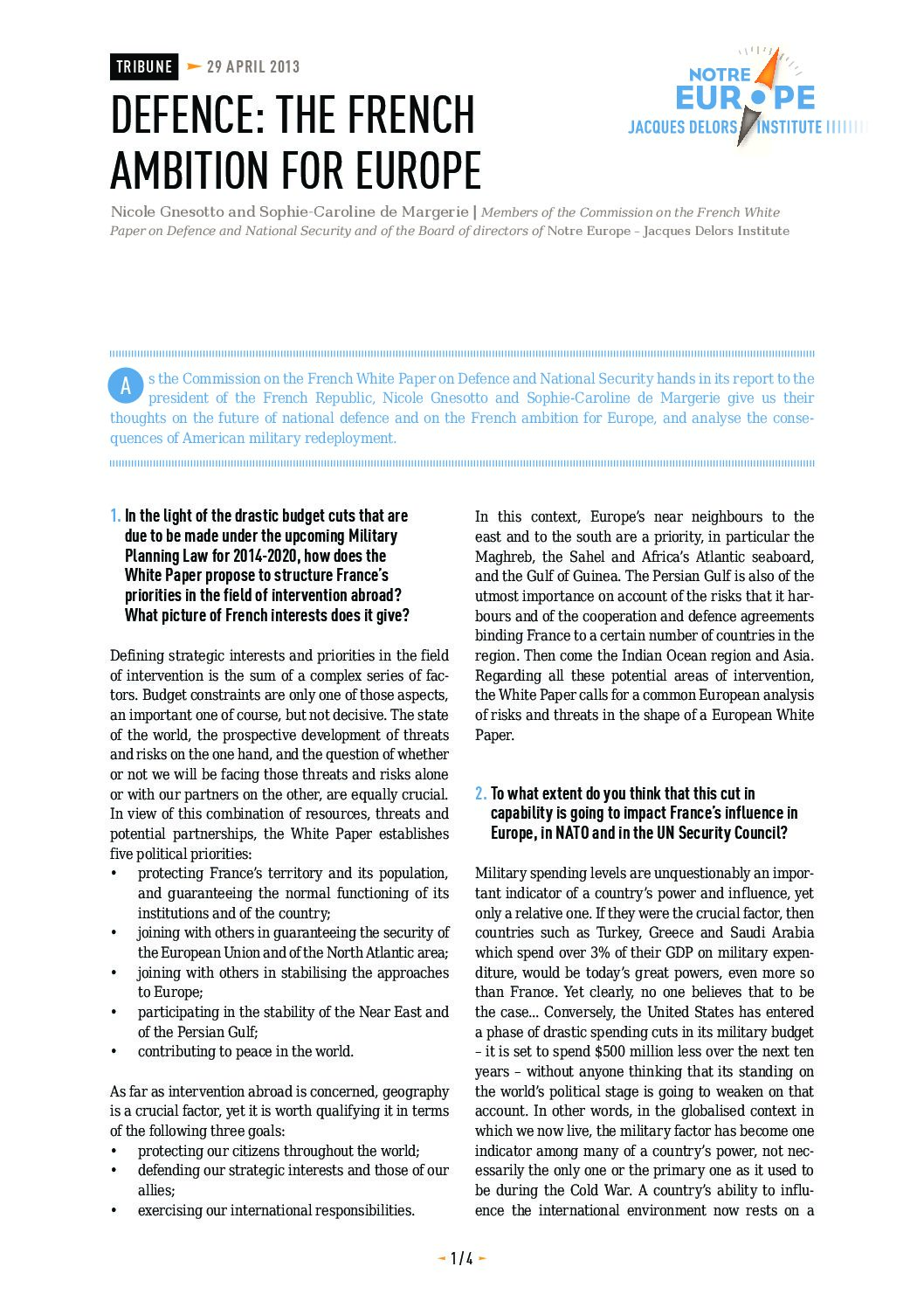 As the Commission on the French White Paper on Defence and National Security hands in its report to the president of the French Republic, Nicole Gnesotto and Sophie-Caroline de Margerie give us their thoughts on the future of national defence and on the French ambition for Europe, by answering six questions :

1 – In the light of the drastic budget cuts that are due to be made under the upcoming Military Planning Law for 2014-2020, how does the White Paper propose to structure France’s priorities in the field of intervention  abroad? What picture of French interests does it give?

2 – To what extent do you think that this cut in capability is going to impact France’s influence in Europe, in NATO and in the UN Security Council?

3 – The 2008 White Paper is frequently held up by our European partners as a reference model. Would it be possible to draft a European White Paper of this kind, and if so, what would its added value be?

4 – Only five EU member states deployed combat aircraft in the NATO operation in Libya in 2011, while the operation in Mali has once again shown that the Europeans are very much divided over the use of force in external operations. Is Europe’s ambition in the security and defence spheres inevitably restricted to civil-military operations?

5 – What are the consequences of the redeployment of the United States’ capabilities towards Asia and of Washington’s aim to see the Europeans play a greater role in their region’s security? Can it help the Europeans improve the compatibility between the development of a European security and defence policy and their commitment to NATO?

6 – With the European Council in December 2013 being devoted to developing a European security and defence policy, François Hollande has said that he is in favour of taking another step forward. How can we best prepare for this deadline and on what issues should the heads of state and government leaders focus primarily  (genuine pooling and sharing efforts, industrial convergence and so forth)?