EU budget negotiations: need for a healthy and constructive debate

As the negotiations of the 2014-2020 EU multiannual financial framework (MFF) are starting to heat up in view of their finalization in the second half-year 2012, Eulalia Rubio stresses the necessity for a more pragmatic and constructive approach, putting into perspective the main challenges under discussion concerning the EU spending and its financing. 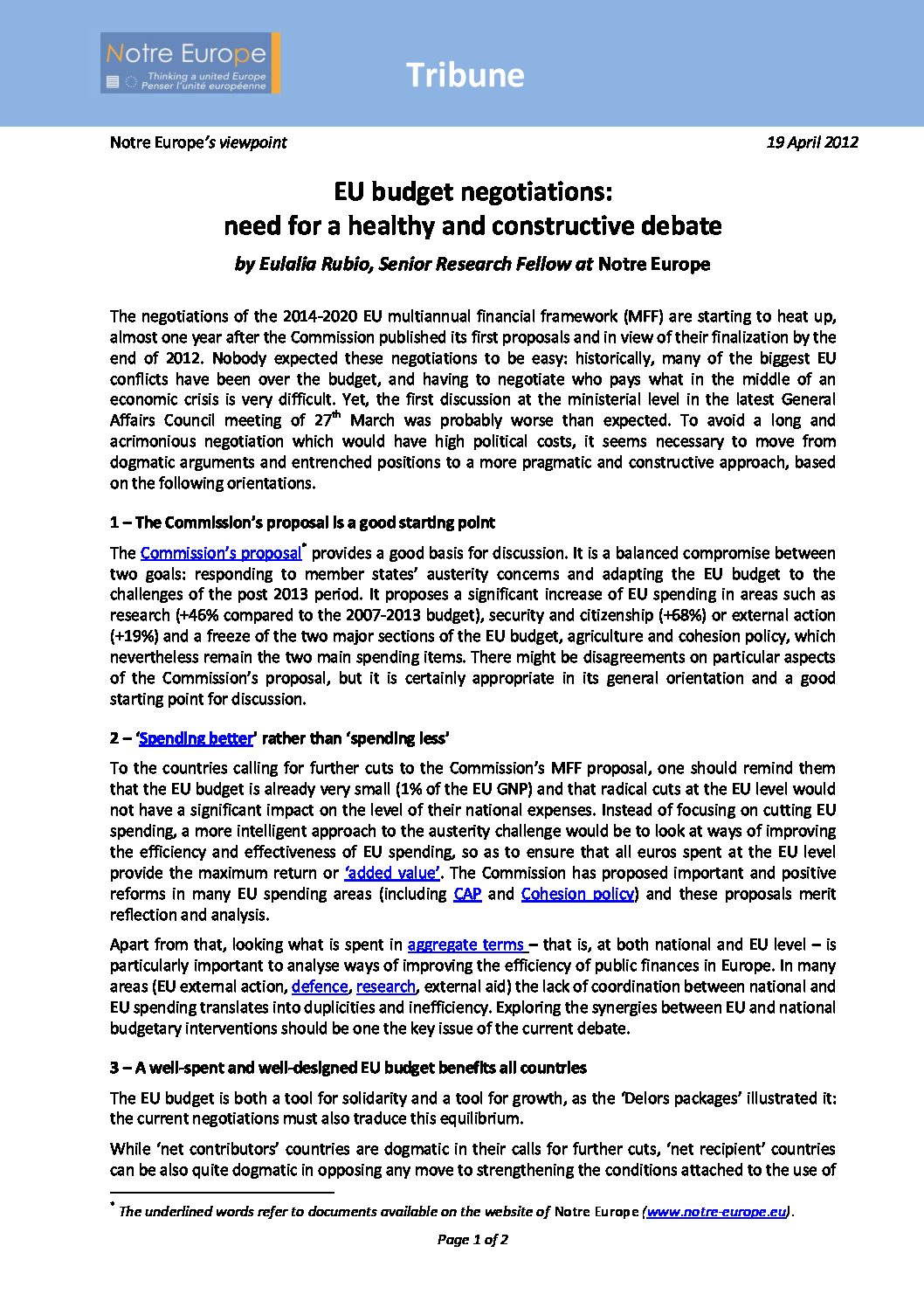 The negotiations of the 2014-2020 EU multiannual financial framework (MFF) are starting to heat up, almost one year after the Commission published its first proposals and in view of their finalization by the end of 2012.
Nobody expected these negotiations to be easy: historically, many of the biggest EU conflicts have been over the budget, and having to negotiate who pays what in the middle of an economic crisis is very difficult. Yet, the first discussion at the ministerial level in the latest General Affairs Council meeting of 27th March was probably worse than expected. To avoid a long and acrimonious negotiation which would have high political costs, it seems necessary to move from dogmatic arguments and entrenched positions to a more pragmatic and constructive approach, based on the following orientations.
1. The Commission’s proposal is a good starting point
The Commission’s proposal provides a good basis for discussion. It is a balanced compromise between two goals: responding to member states’ austerity concerns and adapting the EU budget to the challenges of the post 2013 period. It proposes a significant increase of EU spending in areas such as research (+46% compared to the 2007-2013 budget), security and citizenship (+68%) or external action (+19%) and a freeze of the two major sections of the EU budget, agriculture and cohesion policy, which nevertheless remain the two main spending items. There might be disagreements on particular aspects of the Commission’s proposal, but it is certainly appropriate in its general orientation and a good starting point for discussion.
2. ‘Spending better’ rather than ‘spending less’
To the countries calling for further cuts to the Commission’s MFF proposal, one should remind them that the EU budget is already very small (1% of the EU GNP) and that radical cuts at the EU level would not have a significant impact on the level of their national expenses. Instead of focusing on cutting EU spending, a more intelligent approach to the austerity challenge would be to look at ways of improving the efficiency and effectiveness of EU spending, so as to ensure that all euros spent at the EU level provide the maximum return or ‘added value’. The Commission has proposed important and positive reforms in many EU spending areas (including CAP and Cohesion policy) and these proposals merit reflection and analysis.
Apart from that, looking what is spent in aggregate terms – that is, at both national and EU level – is particularly important to analyse ways of improving the efficiency of public finances in Europe. In many areas (EU external action, defence, research, external aid) the lack of coordination between national and EU spending translates into duplicities and inefficiency. Exploring the synergies between EU and national budgetary interventions should be one the key issue of the current debate.
3. A well-spent and well-designed EU budget benefits all countries

The EU budget is both a tool for solidarity and a tool for growth, as the ‘Delors packages’ illustrated it: the current negotiations must also traduce this equilibrium.  While ‘net contributors’ countries are dogmatic in their calls for further cuts, ‘net recipient’ countries can be also quite dogmatic in opposing any move to strengthening the conditions attached to the use of EU funds. Some of the Commission’s proposals are aimed at ensuring that EU money is effectively spent and that it adequately serves its purpose. Rather than rejecting them on  principle, it would be in their long-term interest to engage in a constructive discussion on how to increase the absorption rates and the performance of EU funds deployed in their territories.

‘Net recipients’ countries also express some distaste for calls for a growth-enhancing EU budget. To a certain extent, this is understandable: too often, talks about ‘modernizing’ the EU budget by rendering it more growth-oriented are a euphemism for sharp cuts to CAP and Cohesion. Instead of resting passive against these calls, they should make explicit their support to a more growth-oriented CAP and confirm their adherence to a vision of Cohesion policy as a long-term investment policy rather than a mere compensatory redistributive tool between poorer and richer regions. They should also accept that some EU spending programmes provide greater EU overall gains if allocated on the basis of excellence.
Finally, the EU budget has a strong potential as a long-term investment tool and can play an important role in stimulating growth and deepening the Single Market by financing large infrastructures of European interest. This is particularly important at the moment when the crisis is forcing many national governments to cut back in investment. The Commission has proposed to allocate 50 billion euro to a new EU fund (the Connecting Europe Facility) devoted to promote investment in trans-European energy, transport and ICT infrastructures. This fund will combine the use of public grants with innovative financial instruments supported by the European Investment Bank and aimed at leveraging private investment. The proposed level of funding for this new Facility should not be reduced during the negotiations.
4. The need to reform the EU financing system on a wide basis
Discussions on how to spend the money should not lead us forget that one of the key issues at stake in the current negotiations is the reform of the EU financing system. For the first time, the Commission has put forward detailed proposals for new EU own resources, through notably an EU financial transaction tax and a genuine ‘EU VAT tax’. They might not be everybody’s first choice, but are credible scenarios for reform. If introduced, they would finance around 40% of EU expenditures. Providing that traditional own resources account for around 15% of the total EU budget, national governments’ contributions to the budget would finance around 40% of the budget (and not around 85 percent as it is the case today).
The European Parliament strongly supports such a reform, but some governments have already expressed their firm opposition to even discuss this topic, while any reform of the EU financing system has to be adopted by unanimity by the EU council and ratified by the 27 national parliaments. Yet, the crisis has clearly shown the perverse effects of having an EU budget almost entirely financed by national budgets. As Tommaso Padoa Schioppa liked to say, “when an idea is right, it will end up by imposing itself to reality sooner or later”: national governments would then be well inspired to acknowledge that the current EU financing system is outdated, and set the basis for a radical reform.
complement these budgetary resources, the EU should also take the lead in issuing project bonds designed to fund future projects, notably in the infrastructure and environment fields. To further boost investments in Europe, it would be appropriate to raise the EIB annual funding capability to 200 billion euro (as opposed to the figure of 80 billion today) by bolstering the capital and the securities provided by the member states.

The discussions on the EU’s budget framework for 2014-2020 will grow in importance from now onwards, and it is essential that all decision makers and stakeholders get involved in it, not only national governments but also the national parliaments, the European parliament, the interest groups and public opinions. Having a healthy and constructive debate on the EU budget will tell a lot about the vitality of the European construction.