Despite a decline in public opinion on the EU observed since 2007 and which significantly worsened in 2011 and 2012, the majority of Europeans still support the single currency. These are the main findings of the analysis of the latest Eurobarometer surveys. 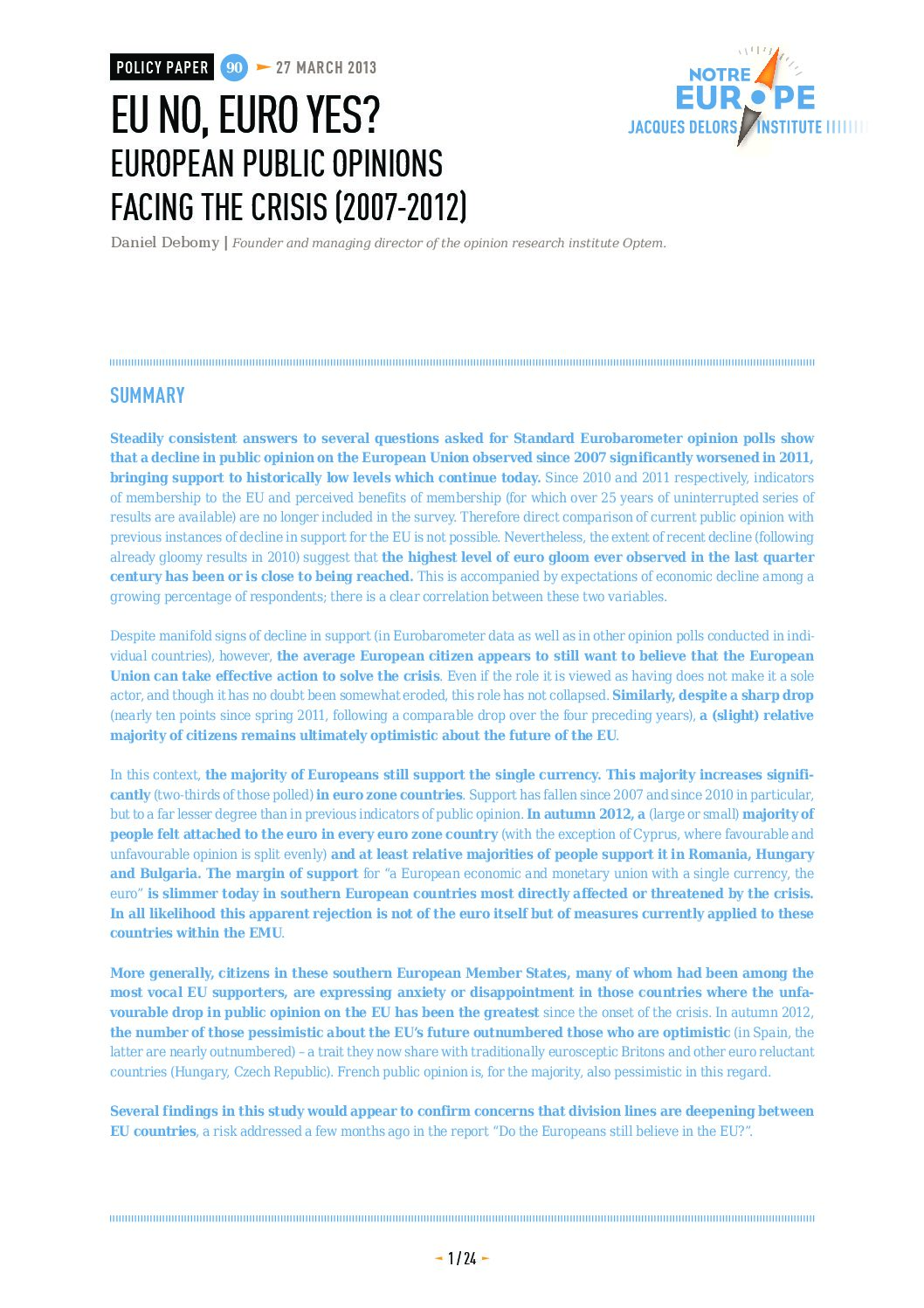 Steadily consistent answers to several questions asked for Standard Eurobarometer opinion polls show that a decline in public opinion on the European Union observed since 2007 significantly worsened in 2011 and 2012, bringing support to historically low levels which continue today. Nevertheless, the extent of recent decline suggest that the highest level of euro gloom ever observed in the last quarter century has been or is close to being reached. This is accompanied by expectations of economic decline among a growing percentage of respondents; there is a clear correlation between these two variables.
Despite manifold signs of decline in support, however, the average European citizen appears to still want to believe that the European Union can take effective action to solve the crisis and a (slight) relative majority of citizens remains ultimately optimistic about the future of the EU.
In this context, the majority of Europeans still support the single currency. This majority increases significantly (two-thirds of those polled) in euro zone countries. Support has fallen since 2007 and since 2010 in particular, but to a far lesser degree than in previous indicators of public opinion. The margin of support for “a European economic and monetary union with a single currency, the euro” is slimmer today in southern European countries most directly affected or threatened by the crisis. In all likelihood this apparent rejection is not of the euro itself but of measures currently applied to these countries within the EMU.

More generally, citizens in these southern European Member States, many of whom had been among the most vocal EU supporters, are expressing anxiety or disappointment in those countries where the unfavourable drop in public opinion on the EU has been the greatest since the onset of the crisis. In autumn 2012, the number of those pessimistic about the EU’s future outnumbered those who are optimistic (in Spain, the latter are nearly outnumbered) – a trait they now share with traditionally eurosceptic Britons and other euro reluctant countries (Hungary, Czech Republic). French public opinion is, for the majority, also pessimistic in this regard.

Several findings in this study would appear to confirm concerns that division lines are deepening between EU countries, a risk addressed a few months ago in the report “Do the Europeans still believe in the EU?”.