Improving EMU: Our recommendations for the debate on the five presidents report

As the five presidents report on the future of the EMU is being released, we publish our recommendations for the debate it will undoubtedly trigger. 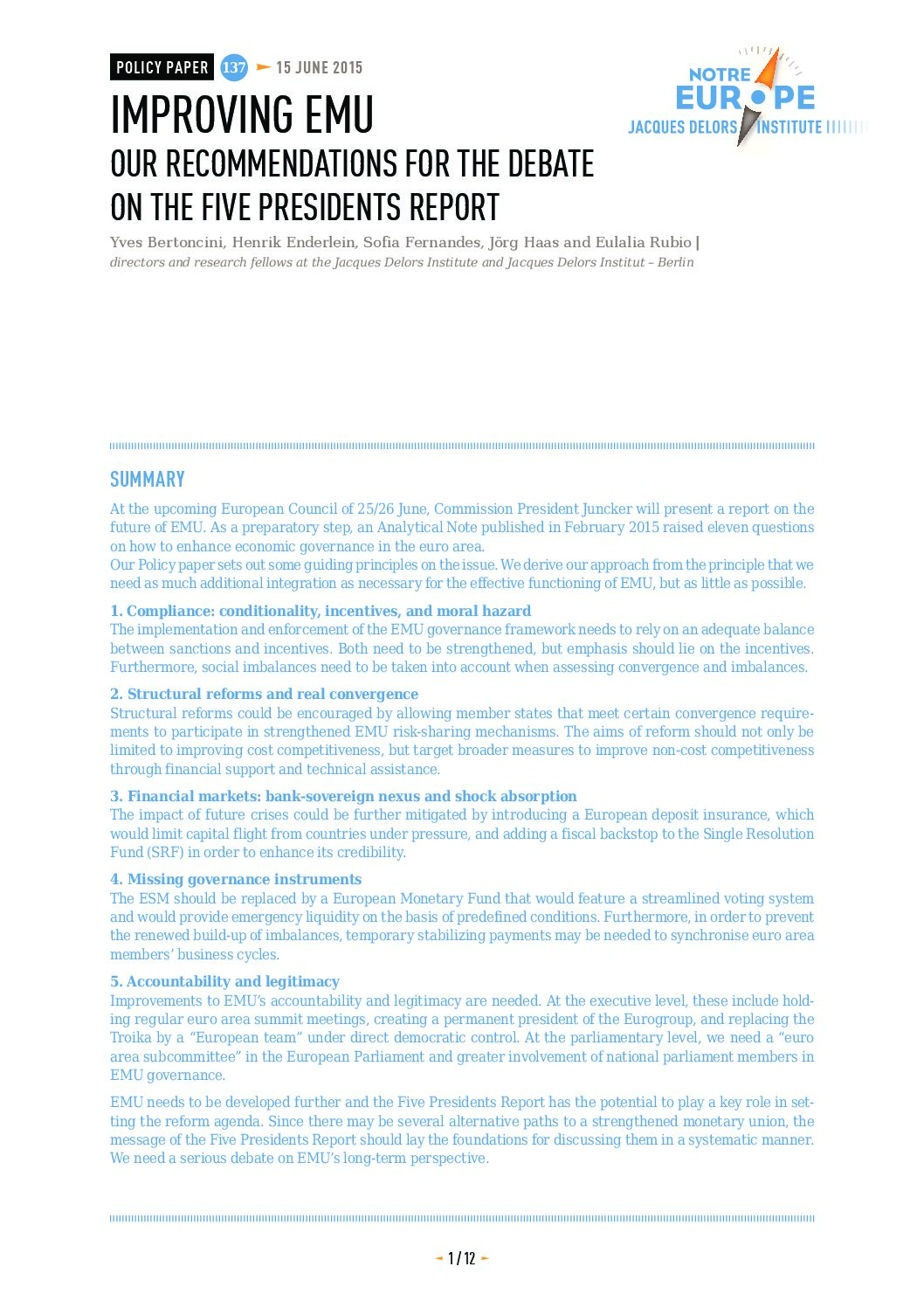 At the European Council of 25/26 June 2015, Commission President Juncker will present a report on the future of EMU. As a preparatory step, an Analytical Note published in February 2015 raised eleven questions on how to enhance economic governance in the euro area.

Our Policy paper sets out some guiding principles on the issue. We derive our approach from the principle that we need as much additional integration as necessary for the effective functioning of EMU, but as little as possible.

1. Compliance: conditionality, incentives, and moral hazard
The implementation and enforcement of the EMU governance framework needs to rely on an adequate balance between sanctions and incentives. Both need to be strengthened, but emphasis should lie on the incentives. Furthermore, social imbalances need to be taken into account when assessing convergence and imbalances.

2. Structural reforms and real convergence
Structural reforms could be encouraged by allowing member states that meet certain convergence requirements to participate in strengthened EMU risk-sharing mechanisms. The aims of reform should not only be limited to improving cost competitiveness, but target broader measures to improve non-cost competitiveness through financial support and technical assistance.

3. Financial markets: bank-sovereign nexus and shock absorption
The impact of future crises could be further mitigated by introducing a European deposit insurance, which would limit capital flight from countries under pressure, and adding a fiscal backstop to the Single Resolution Fund (SRF) in order to enhance its credibility.

4. Missing governance instruments
The ESM should be replaced by a European Monetary Fund that would feature a streamlined voting system and would provide emergency liquidity on the basis of predefined conditions. Furthermore, in order to prevent the renewed build-up of imbalances, temporary stabilizing payments may be needed to synchronise euro area members’ business cycles.

5. Accountability and legitimacy
Improvements to EMU’s accountability and legitimacy are needed. At the executive level, these include holding regular euro area summit meetings, creating a permanent president of the Eurogroup, and replacing the Troika by a “European team” under direct democratic control. At the parliamentary level, we need a “euro area subcommittee” in the European Parliament and greater involvement of national parliament members in EMU governance.

EMU needs to be developed further and the Five Presidents Report has the potential to play a key role in setting the reform agenda. Since there may be several alternative paths to a strengthened monetary union, the message of the Five Presidents Report should lay the foundations for discussing them in a systematic manner. We need a serious debate on EMU’s long-term perspective.

This Policy paper is also available in French and German.