Maastricht: The Five Pillars of Wisdom

While the Heads of State and government meet in Brussels 20 years precisely after the Maastricht summit, António Vitorino and Yves Bertoncini come back on the major initiatives launched at the occasion of these memorable days, especially the economic and monetary union. They underline the historical aftermath of these initiatives, which offer sound political and legal foundations on which it is always essential to build in these troubled times. 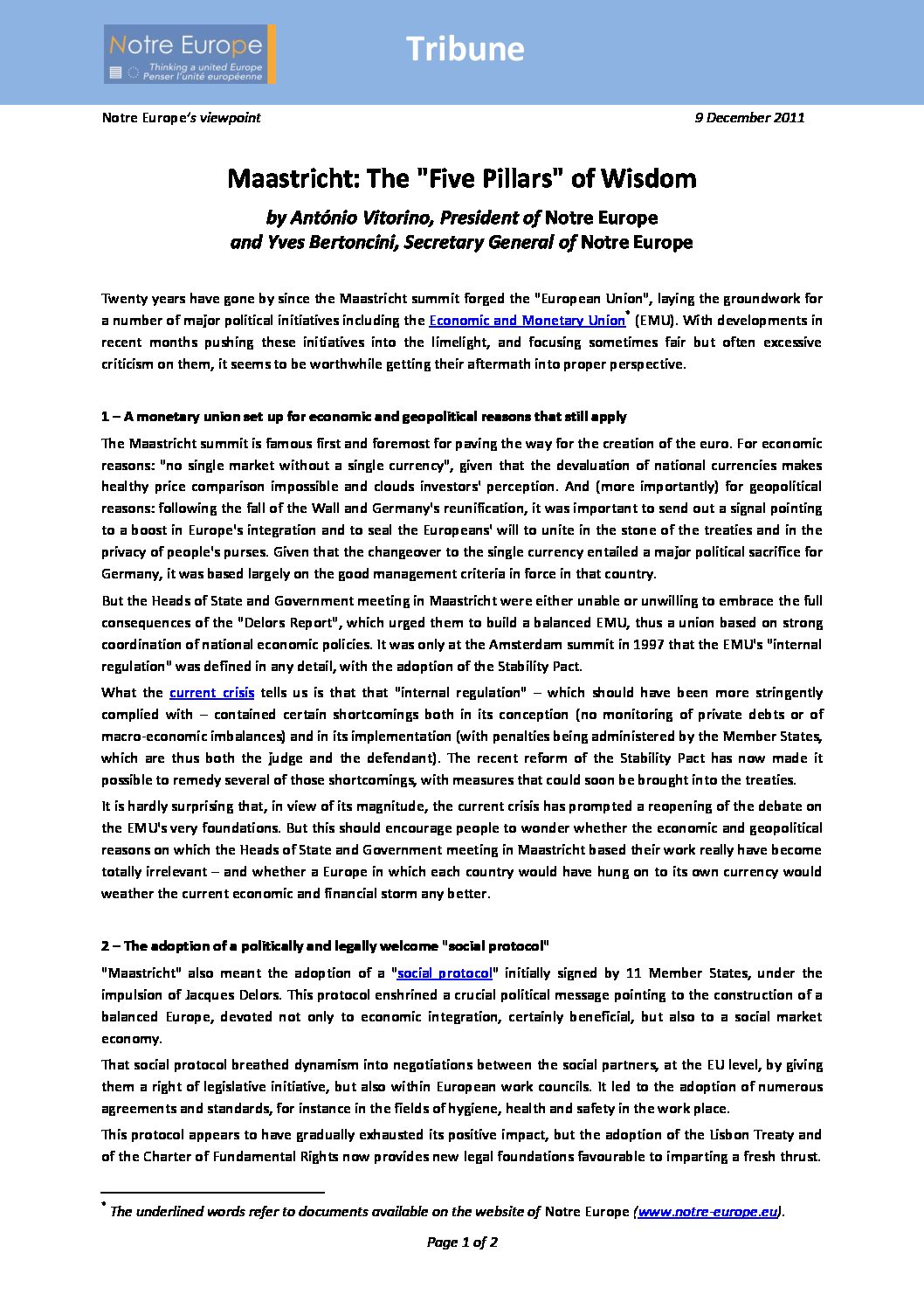 Twenty years have gone by since the Maastricht summit forged the “European Union”, laying the groundwork for a number of major political initiatives including the Economic and Monetary Union (EMU). With developments in recent months pushing these initiatives into the limelight, and focusing sometimes fair but often excessive criticism on them, it seems to be worthwhile getting their aftermath into proper perspective.

The Maastricht summit is famous first and foremost for paving the way for the creation of the euro. For economic reasons: “no single market without a single currency”, given that the devaluation of national currencies makes healthy price comparison impossible and clouds investors’ perception. And (more importantly) for geopolitical reasons: following the fall of the Wall and Germany’s reunification, it was important to send out a signal pointing to a boost in Europe’s integration and to seal the Europeans’ will to unite in the stone of the treaties and in the privacy of people’s purses. Given that the changeover to the single currency entailed a major political sacrifice for Germany, it was based largely on the good management criteria in force in that country.

But the Heads of State and Government meeting in Maastricht were either unable or unwilling to embrace the full consequences of the “Delors Report”, which urged them to build a balanced EMU, thus a union based on strong coordination of national economic policies. It was only at the Amsterdam summit in 1997 that the EMU’s “internal regulation” was defined in any detail, with the adoption of the Stability Pact.

What the current crisis tells us is that that “internal regulation” – which should have been more stringently complied with – contained certain shortcomings both in its conception (no monitoring of private debts or of macro-economic imbalances) and in its implementation (with penalties being administered by the Member States, which are thus both the judge and the defendant). The recent reform of the Stability Pact has now made it possible to remedy several of those shortcomings, with measures that could soon be brought into the treaties.

It is hardly surprising that, in view of its magnitude, the current crisis has prompted a reopening of the debate on the EMU’s very foundations. But this should encourage people to wonder whether the economic and geopolitical reasons on which the Heads of State and Government meeting in Maastricht based their work really have become totally irrelevant – and whether a Europe in which each country would have hung on to its own currency would weather the current economic and financial storm any better.

2 – The adoption of a politically and legally welcome “social protocol”

“Maastricht” also meant the adoption of a “social protocol” initially signed by 11 Member States, under the impulsion of Jacques Delors. This protocol enshrined a crucial political message pointing to the construction of a balanced Europe, devoted not only to economic integration, certainly beneficial, but also to a social market economy.

That social protocol breathed dynamism into negotiations between the social partners, at the EU level, by giving them a right of legislative initiative, but also within European work councils. It led to the adoption of numerous agreements and standards, for instance in the fields of hygienne, health and safety in the work place.

This protocol appears to have gradually exhausted its positive impact, but the adoption of the Lisbon Treaty and of the Charter of Fundamental Rights now provides new legal foundations favourable to imparting a fresh thrust. No doubt that today’s crisis must incite both the Community and national authorities to address the issue, but just as it was in the past, so today too, it is first and foremost a matter of finding the political will to do so.

3 – A common foreign policy lacking of resources, but a goal to aim for all the same

The Maastricht summit also spawned the famous “common foreign and security policy” (CFSP), which was based on the clear realisation that the European countries had to join forces if they were to have any clout in the post-Cold War world. The Heads of State and Government’ biggest mistake was not to give the EU the political and institutional resources it needed to achieve that goal. In any event, those resources were gradually bolstered first by the Amsterdam Treaty (instituting the post of High Representative) and then by the Lisbon Treaty (setting up the European External Action Service).

This thoughtless “nominalism”, however, has logically fuelled a process where the “CFSP” has not really existed for the past twenty years, while the EU has often acted effectively in external affairs thanks, in particular, to its enlargement or trade policies. At least the Maastricht summit had the merit of publicising the need for common external action, which, by the way, enjoys broad grassroots support. More than ever, it is up to the national and European authorities to lend substance to that action in a world in which Europe is shrinking.

4 – Structured cooperation in the fields of justice and interior affairs

The “third pillar” of the treaty adopted in Maastricht led to the establishment of police and judicial cooperation in an effort to better regulate the free movement of people within the EU – the famous “fourth freedom”, which is the most tangible of all. It also led the EU to become involved in the spheres of immigration and of asylum.

This political thrust gradually triggered the development of a spectacular Community pooling trend in the fields of civil law, immigration, asylum and border management (Amsterdam Treaty), and later also of criminal law (Lisbon Treaty), despite those areas being broadly dominated by national sovereignties and rights.

A great deal remains to be done to make life easier for European citizens who choose to live in a different EU Member State; and a great deal also needs to be done in connection with the management of external borders, which have become common borders but whose monitoring is still largely a national affair. At this juncture, it is a matter of strengthening the European tools set up to assist Member States (“Frontex”, the Solidarity Fund and so on) – unless, of course, it is considered to return to national borders, which would be both costly and ineffectual.

Lastly, the Maastricht summit was a statement telling us that the European construction concerns the people of Europe directly, endowing them with additional rights compared to those that they enjoy at the national level. These rights include the right to vote and be voted for in local and European elections, symbolising membership of two communities within which all European citizens must be able to appoint those who represent them.

The citizens have not always used these rights to the full, whereas they have taken greater advantage of their right to move freely, which has become something of a “natural right” for the younger generations. In further bolstering the European Parliament’s powers and in establishing a “citizens’ initiative right”, the Lisbon Treaty has increased the political rights that the EU’s citizens enjoy – all that is needed now is to give them good reasons to use those rights more extensively.

Yet it may be worthwhile pointing out that European citizenship is exercised also at national election time, because national elections designate the members of the European Council and of the Council of Ministers, which play a crucial role in Community life; and that it is at the national level that the citizens continue to exercise their basic political rights, given that EU intervention is governed by the “principle of subsidiarity”, another principle that was proclaimed in Maastricht.

Thus twenty years after the summit that set them up, the “five pillars” of the Maastricht Treaty seem by and large still to be sound political and legal foundations on which to build – that is a fact which we would be wise to take on board in these troubled times. 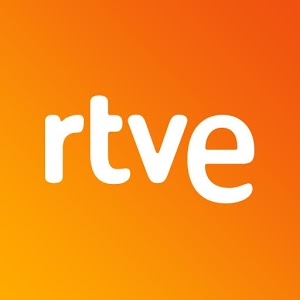 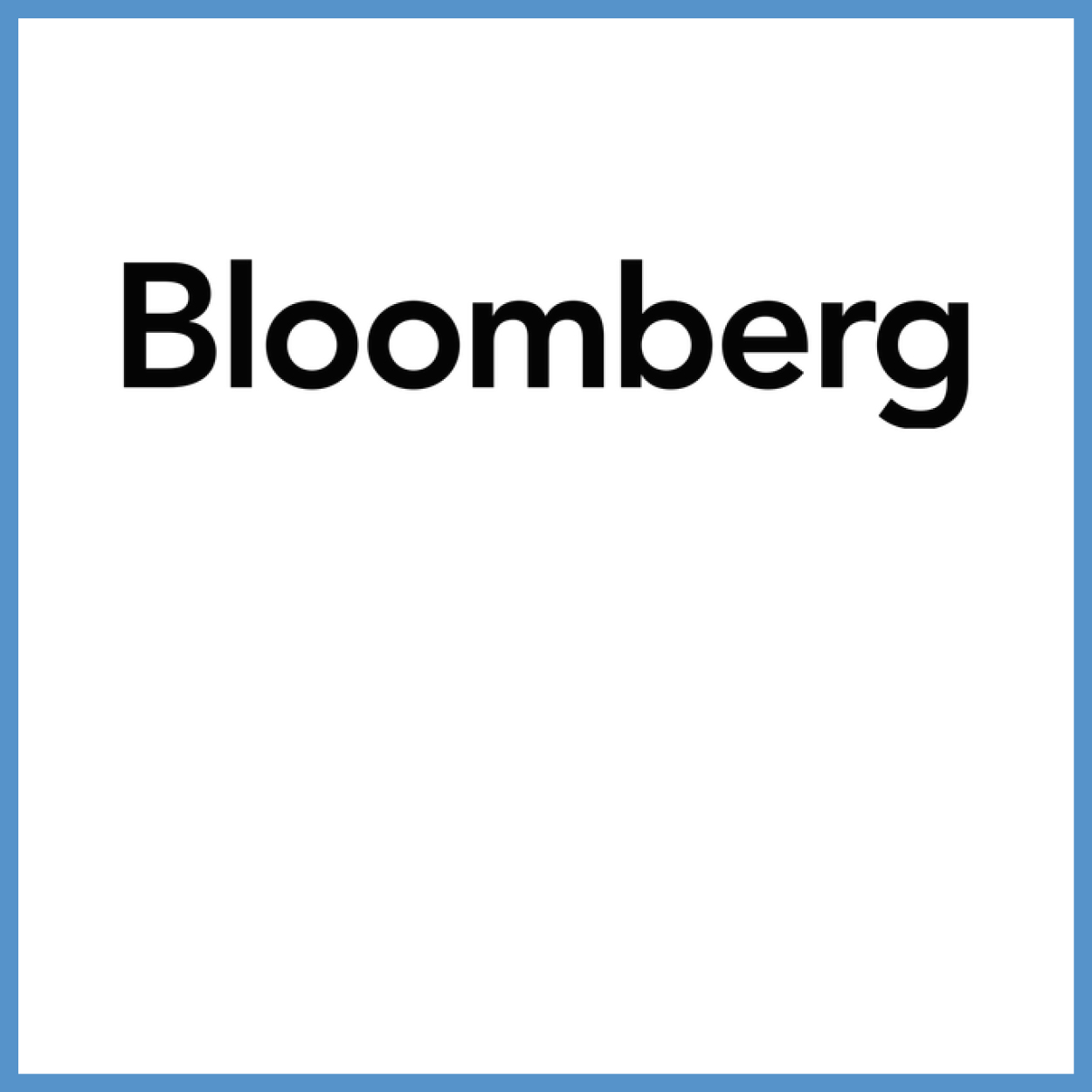 Mario Draghi on the single market and the eurozone : preaching in the desert