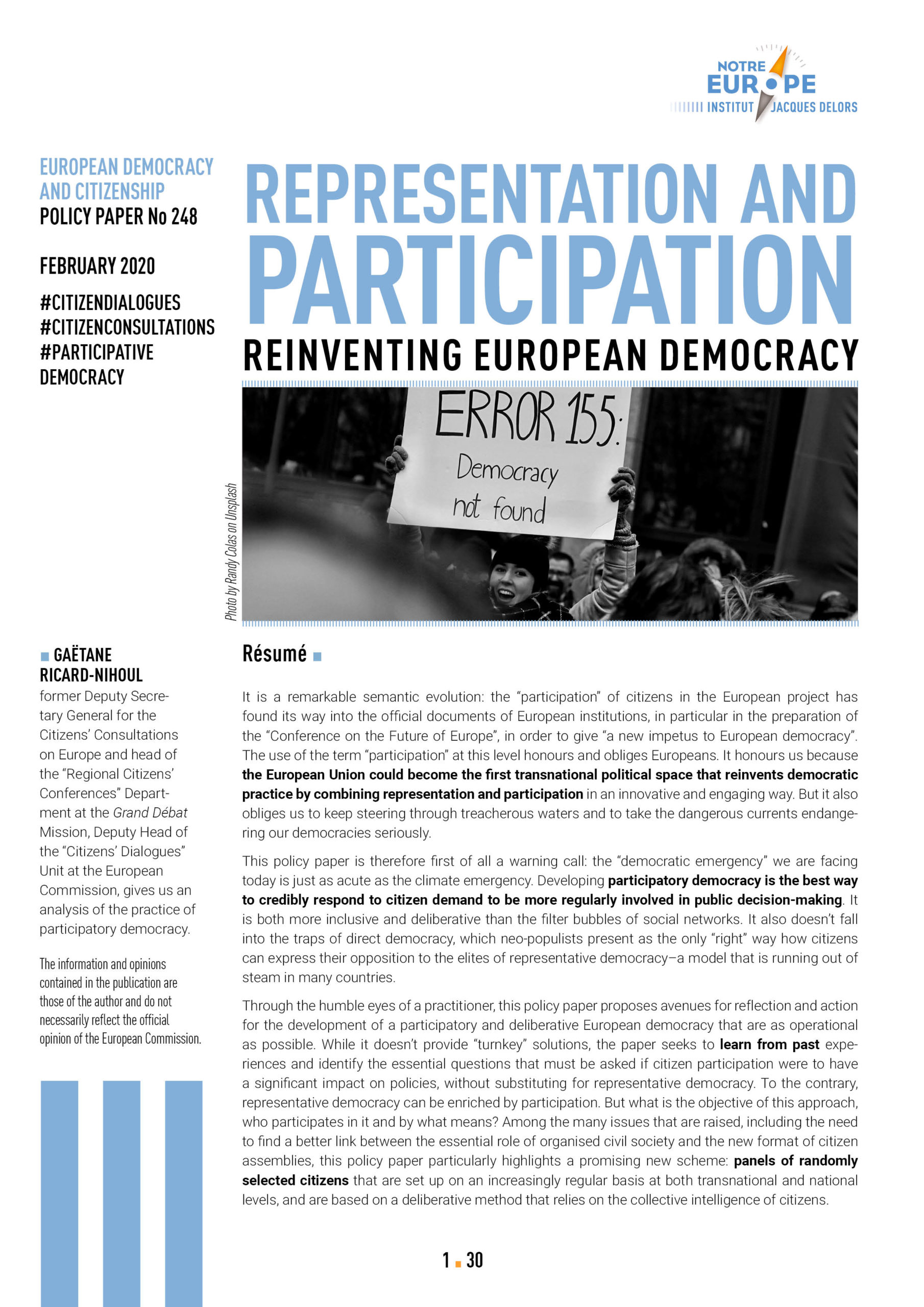 By Gaëtane Ricard-Nihoul, Former Deputy Secretary General for the Citizens’ Consultations on Europe and head of the “Regional Citizens’ Conferences” Department at the Grand Débat Mission, Deputy Head of the “Citizens’ Dialogues” Unit at the European Commission, gives us an analysis of the practice of ­participatory democracy.

It is a remarkable semantic evolution: the “participation” of citizens in the European project has found its way into the official documents of European institutions, in particular in the preparation of the “­Conference on the Future of Europe”, in order to give “a new impetus to European democracy”. The use of the term “participation” at this level honours and obliges Europeans. It honours us because the ­European Union could become the first transnational political space that reinvents democratic practice by combining representation and participation in an innovative and engaging way. But it also obliges us to keep steering through treacherous waters and to take the dangerous currents endangering our democracies seriously.
This policy paper is therefore first of all a warning call: the “democratic emergency” we are facing today is just as acute as the climate emergency. Developing participatory democracy is the best way to credibly respond to citizen demand to be more regularly involved in public decision-making. It is both more inclusive and deliberative than the filter bubbles of social networks. It also doesn’t fall into the traps of direct democracy, which neo-populists present as the only “right” way how citizens can express their opposition to the elites of representative democracy–a model that is running out of steam in many countries.
Through the humble eyes of a practitioner, this policy paper proposes avenues for reflection and action for the development of a participatory and deliberative European democracy that are as operational as possible. While it doesn’t provide “turnkey” solutions, the paper seeks to learn from past experiences and identify the essential questions that must be asked if citizen participation were to have a significant impact on policies, without substituting for representative democracy. To the contrary, representative democracy can be enriched by participation. But what is the objective of this approach, who participates in it and by what means? Among the many issues that are raised, including the need to find a better link between the essential role of organised civil society and the new format of citizen assemblies, this policy paper particularly highlights a promising new scheme: panels of randomly selected citizens that are set up on an increasingly regular basis at both transnational and national levels, and are based on a deliberative method that relies on the collective intelligence of citizens.