The euro, words and facts

As the debates about the debt and eurozone crises grow in intensity, António Vitorino and Yves Bertoncini seek to put the main political and financial issues in the current negotiations into context and to indicate how the EU and its member states can contribute towards dealing with them. 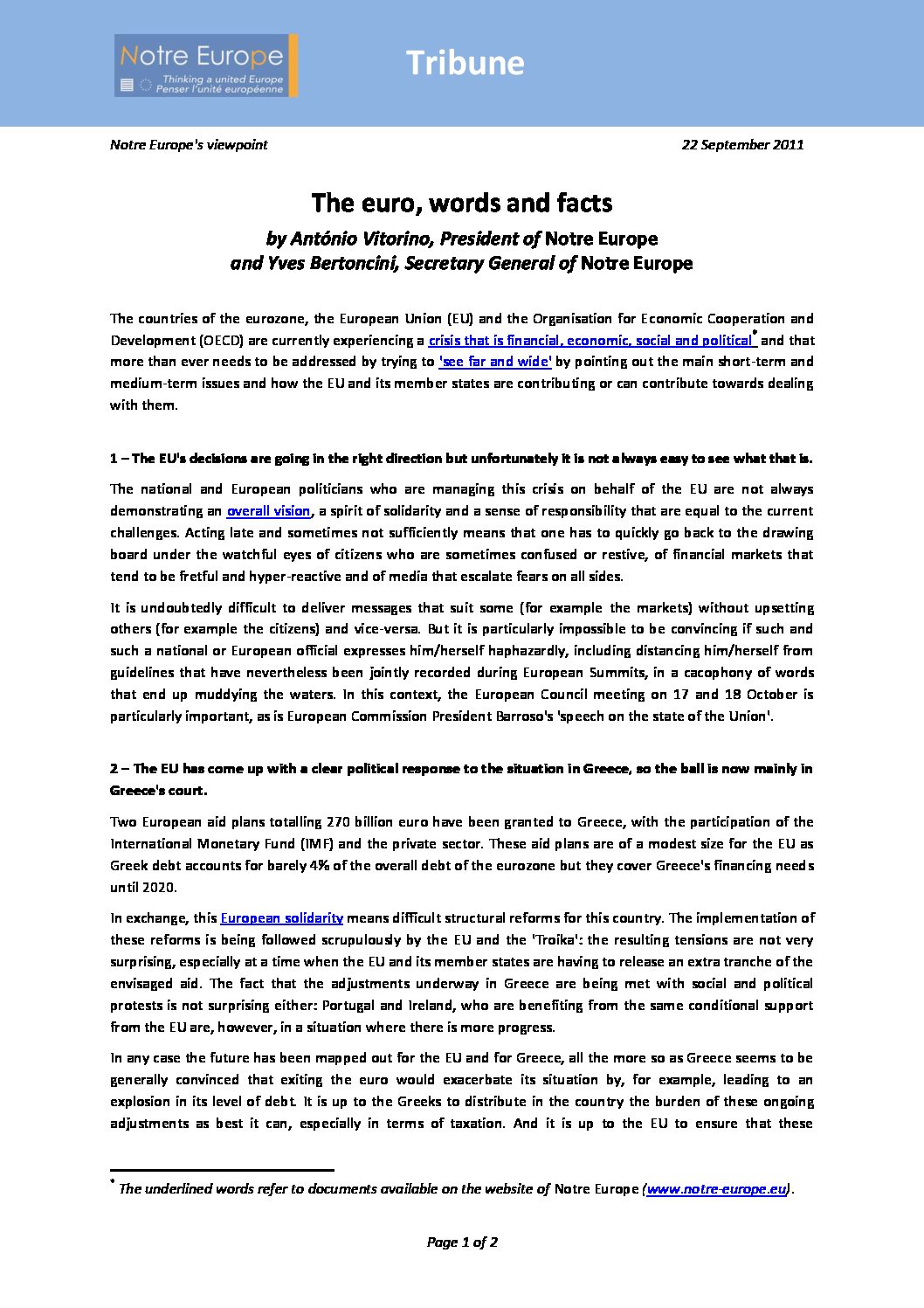 The countries of the eurozone, the European Union (EU) and the Organisation for Economic Cooperation and Development (OECD) are currently experiencing a crisis that is financial, economic, social and political and that more than ever needs to be addressed by trying to ‘see far and wide’ by pointing out the main short-term and medium-term issues and how the EU and its member states are contributing or can contribute towards dealing with them.

The national and European politicians who are managing this crisis on behalf of the EU are not always demonstrating an overall vision, a spirit of solidarity and a sense of responsibility that are equal to the current challenges. Acting late and sometimes not sufficiently means that one has to quickly go back to the drawing board under the watchful eyes of citizens who are sometimes confused or restive, of financial markets that tend to be fretful and hyper-reactive and of media that escalate fears on all sides.

It is undoubtedly difficult to deliver messages that suit some (for example the markets) without upsetting others (for example the citizens) and vice-versa. But it is particularly impossible to be convincing if such and such a national or European official expresses him/herself haphazardly, including distancing him/herself from guidelines that have nevertheless been jointly recorded during European Summits, in a cacophony of words that end up muddying the waters. In this context, the European Council meeting on 17 and 18 October is particularly important, as is European Commission President Barroso’s ‘speech on the state of the Union’.

Two European aid plans totalling 270 billion euro have been granted to Greece, with the participation of the International Monetary Fund (IMF) and the private sector. These aid plans are of a modest size for the EU as Greek debt accounts for barely 4% of the overall debt of the eurozone but they cover Greece’s financing needs until 2020.

In exchange, this European solidarity means difficult structural reforms for this country. The implementation of these reforms is being followed scrupulously by the EU and the ‘Troika’: the resulting tensions are not very surprising, especially at a time when the EU and its member states are having to release an extra tranche of the envisaged aid. The fact that the adjustments underway in Greece are being met with social and political protests is not surprising either: Portugal and Ireland, who are benefiting from the same conditional support from the EU are, however, in a situation where there is more progress.

In any case the future has been mapped out for the EU and for Greece, all the more so as Greece seems to be generally convinced that exiting the euro would exacerbate its situation by, for example, leading to an explosion in its level of debt. It is up to the Greeks to distribute in the country the burden of these ongoing adjustments as best it can, especially in terms of taxation. And it is up to the EU to ensure that these adjustments can be carried out at the envisaged speed and to spread out Greek repayment in an ordered way if necessary.

The European Summit of 21 July 2011 noted that Greece would not be able to repay all its debt and that it was therefore appropriate that financial players were asked to contribute, even if this was on a ‘voluntary’ basis. If the option of a restructuring or rescheduling of Greek debt were chosen, it would mark a change in the degree but not the nature of the EU’s position. A number of financial players have already set aside provisions for losses with regard to the contracted commitments that they had in this country, up to at least 21% of the total of the sums exposed. These amounts are detrimental to the banks concerned but, as long as they remain well below their annual profits, in theory they have no major economic and social impacts.

The systemic risk linked to the possibility of another country having payment difficulties must of course be averted as must all those risks linked to financial players lacking liquidity or creditworthiness. This is in particular the role of the central banks, who have just recently injected a massive amount of dollars, with the ECB having intervened most of all. This is also the role of national authorities, who can again help some of their financial establishments if necessary by in particular drawing conclusions from the results of ‘stress tests’ carried out under the aegis of the EU. The same goes for private investors, who could be called on to subscribe to increases in capital, even if the situation in the stock market seems today less favourable. Finally, the European Financial Stability Fund (EFSF) will soon have the capacity to help banks in difficulty preventively and to buy up debt security on the secondary market, thereby giving relief to the ECB. A further hike in its effective capacity to lend, which will be increased from 250 billion euro to 440 billion euro may be envisaged on this basis if it turned out to be necessary to help other eurozone countries.

Reluctance that had already been expressed at the time of the first European aid plans has again been voiced regarding the ratification of amendments to the status of the EFSF. A question mark hangs over this ratification particularly in Finland and perhaps in Slovakia, where a spirit of solidarity and responsibility is ‘lacking’ and which one can of course deplore. However, one can expect these two countries to ratify along with the others in that the objections put forward do not come from the major parties and given the domino effect created by various ratifications by eurozone countries. One such ratification will be achieved at the Bundestag if only thanks to the positive vote by the opposition. Here, the scale of the debates underway is no surprise: the debates are legimate given the revisions in doctrine and substantial financial commitments that this country has had to make since 2007.

The recent decision to strengthen the ‘Stability and Growth Pact’ has contributed towards defusing some of the reluctance of traditionally rigorous countries as it foresees a more scrupulous monitoring of public and private accounts and facilitate the adoption of sanctions. But it is in particular because the prolonged defiance of the financial markets, the risks of ‘contagion’ and the reluctance of public opinion are leading them to face conflicting political choices that each member state needs to conscientiously weigh up if efforts agreed in the context of the eurozone are worth it. It is then that they come to realise that these efforts and their costs are in the end limited by comparison with those that a hypothetical ‘opting out’ and a break-up of the European currency would lead to. From this point of view, the ongoing crisis will no doubt have amounted to a bitter but at the end of the day salutary hands-on lesson.