The macro-economic conditionality, the story of a triple penalty for regions

In her Policy paper, Marjorie Jouen questions the real purpose of the macro-economic conditionality, that is the link between the effectiveness of the European structural and investment funds (ESIF) and good economic governance. 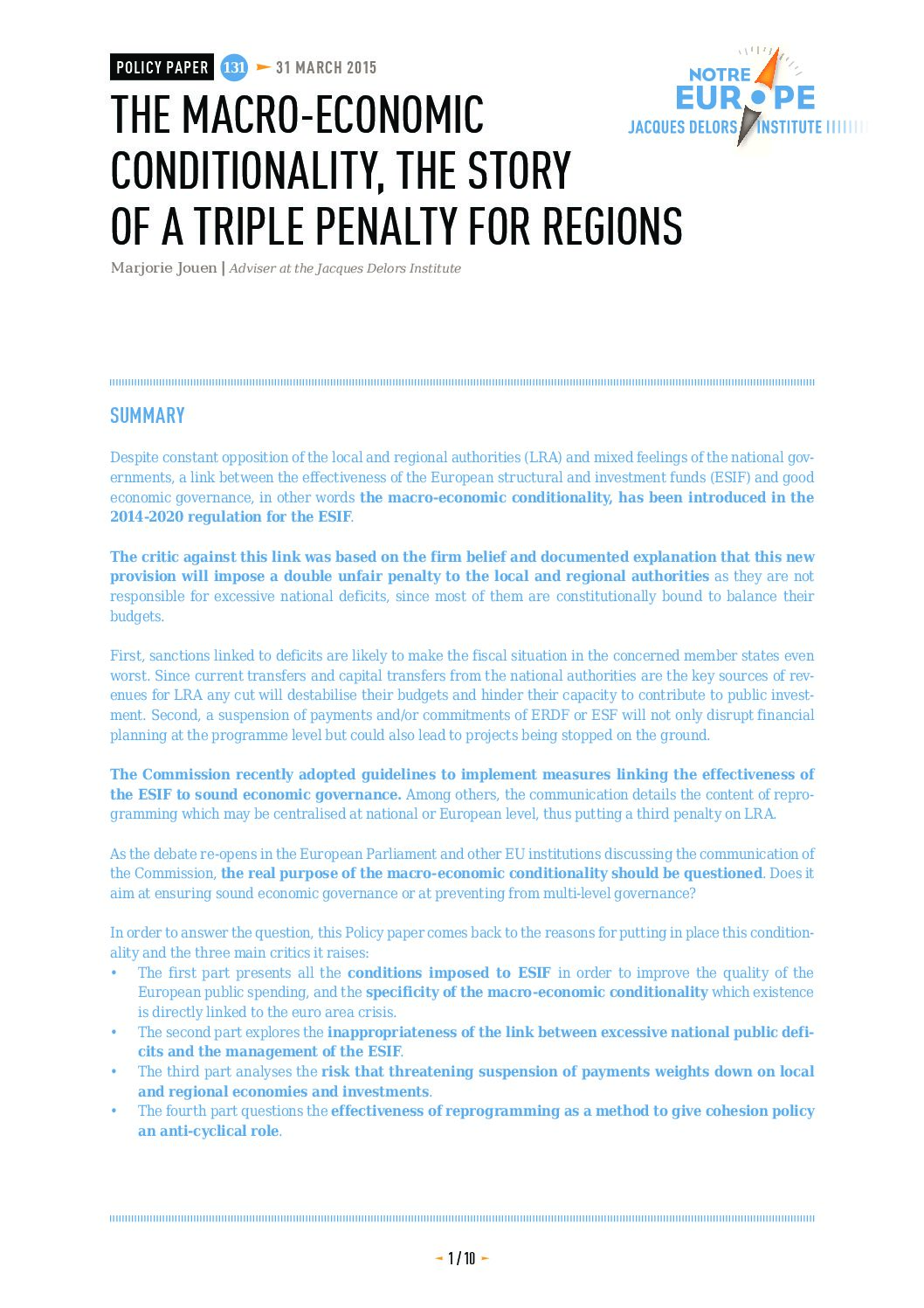 Despite constant opposition of the local and regional authorities (LRA) and mixed feelings of the national governments, a link between the effectiveness of the European structural and investment funds (ESIF) and good economic governance, in other words the macro-economic conditionality, has been introduced in the 2014-2020 regulation for the ESIF.

The critic against this link was based on the firm belief and documented explanation that this new provision will impose a double unfair penalty to the local and regional authorities as they are not responsible for excessive national deficits, since most of them are constitutionally bound to balance their budgets.

First, sanctions linked to deficits are likely to make the fiscal situation in the concerned member states even worst. Since current transfers and capital transfers from the national authorities are the key sources of revenues for LRA any cut will destabilise their budgets and hinder their capacity to contribute to public investment. Second, a suspension of payments and/or commitments of ERDF or ESF will not only disrupt financial planning at the programme level but could also lead to projects being stopped on the ground.

The Commission recently adopted guidelines to implement measures linking the effectiveness of the ESIF to sound economic governance. Among others, the communication details the content of reprogramming which may be centralised at national or European level, thus putting a third penalty on LRA.

As the debate re-opens in the European Parliament and other EU institutions discussing the communication of the Commission, the real purpose of the macro-economic conditionality should be questioned. Does it aim at ensuring sound economic governance or at preventing from multi-level governance?

In order to answer the question, this Policy paper comes back to the reasons for putting in place this conditionality and the three main critics it raises:
– The first part presents all the conditions imposed to ESIF in order to improve the quality of the European public spending, and the specificity of the macro-economic conditionality which existence is directly linked to the euro area crisis.
– The second part explores the inappropriateness of the link between excessive national public deficits and the management of the ESIF.
– The third part analyses the risk that threatening suspension of payments weights down on local and regional economies and investments.
– The fourth part questions the effectiveness of reprogramming as a method to give cohesion policy an anti-cyclical role.