The ‘TSCG’: much ado about nothing?

While the ‘Treaty on Stability, Coordination and Governance’ signed on 1 March 2012 fostered a large debate, António Vitorino analyses the political, legal, economic and institutional scope of this Treaty, in a Viewpoint by Notre Europe entitled “The ‘TSCG’: much ado about nothing?” 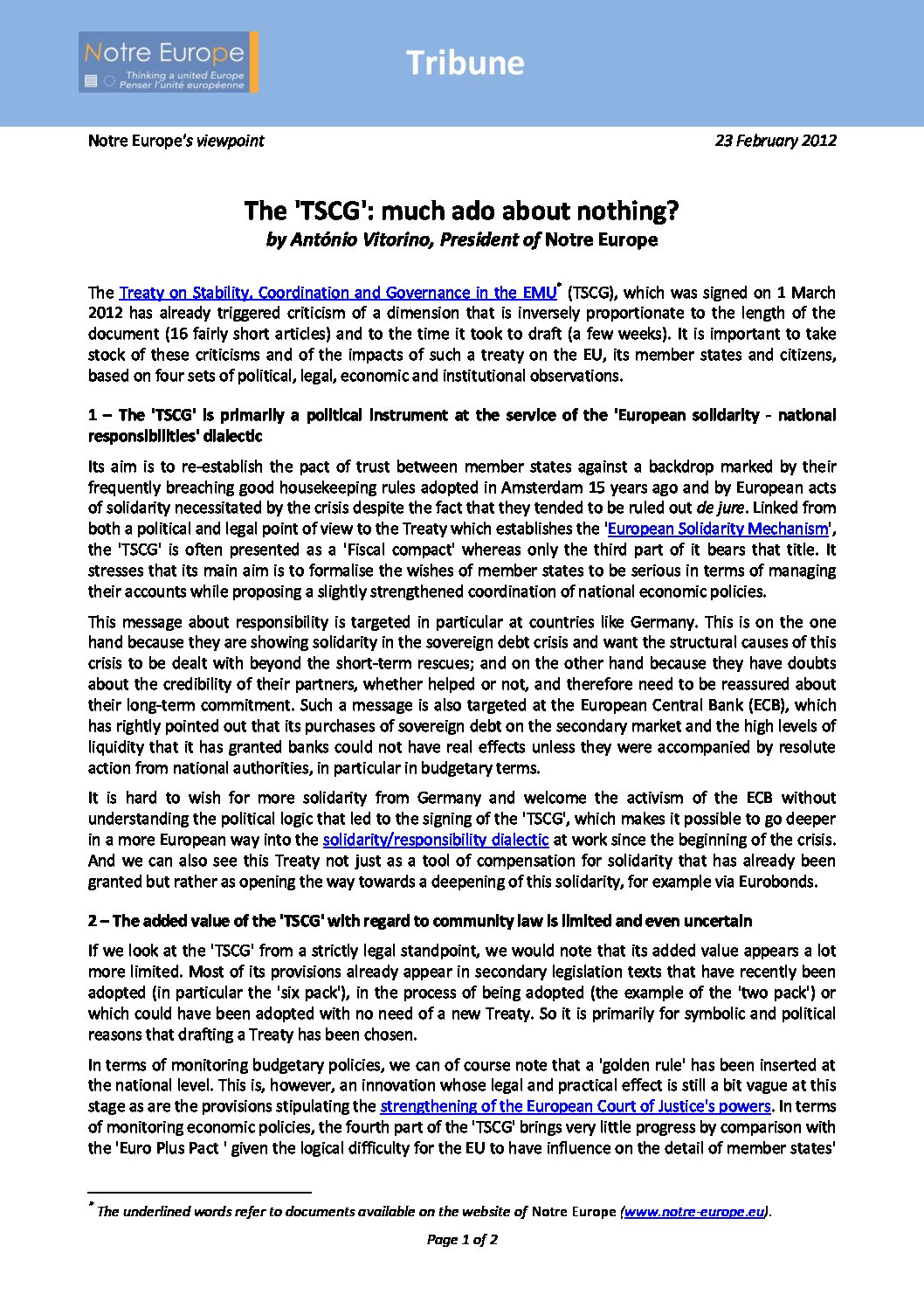 The Treaty on Stability, Coordination and Governance in the EMU (TSCG), which was signed on 1 March 2012 has already triggered criticism of a dimension that is inversely proportionate to the length of the document (16 fairly short articles) and to the time it took to draft (a few weeks). It is important to take stock of these criticisms and of the impacts of such a treaty on the EU, its member states and citizens, based on four sets of political, legal, economic and institutional observations.

Its aim is to re-establish the pact of trust between member states against a backdrop marked by their frequently breaching good housekeeping rules adopted in Amsterdam 15 years ago and by European acts of solidarity necessitated by the crisis despite the fact that they tended to be ruled out de jure. Linked from both a political and legal point of view to the Treaty which establishes the ‘European Solidarity Mechanism’, the ‘TSCG’ is often presented as a ‘Fiscal compact’ whereas only the third part of it bears that title. It stresses that its main aim is to formalise the wishes of member states to be serious in terms of managing their accounts while proposing a slightly strengthened coordination of national economic policies.

This message about responsibility is targeted in particular at countries like Germany. This is on the one hand because they are showing solidarity in the sovereign debt crisis and want the structural causes of this crisis to be dealt with beyond the short-term rescues; and on the other hand because they have doubts about the credibility of their partners, whether helped or not, and therefore need to be reassured about their long-term commitment. Such a message is also targeted at the European Central Bank (ECB), which has rightly pointed out that its purchases of sovereign debt on the secondary market and the high levels of liquidity that it has granted banks could not have real effects unless they were accompanied by resolute action from national authorities, in particular in budgetary terms.

It is hard to wish for more solidarity from Germany and welcome the activism of the ECB without understanding the political logic that led to the signing of the ‘TSCG’, which makes it possible to go deeper in a more European way into the solidarity/responsibility dialectic at work since the beginning of the crisis. And we can also see this Treaty not just as a tool of compensation for solidarity that has already been granted but rather as opening the way towards a deepening of this solidarity, for example via Eurobonds.

If we look at the ‘TSCG’ from a strictly legal standpoint, we would note that its added value appears a lot more limited. Most of its provisions already appear in secondary legislation texts that have recently been adopted (in particular the ‘six pack’), in the process of being adopted (the example of the ‘two pack’) or which could have been adopted with no need of a new Treaty. So it is primarily for symbolic and political reasons that drafting a Treaty has been chosen.

In terms of monitoring budgetary policies, we can of course note that a ‘golden rule’ has been inserted at the national level. This is, however, an innovation whose legal and practical effect is still a bit vague at this stage as are the provisions stipulating the strengthening of the European Court of Justice’s powers. In terms of monitoring economic policies, the fourth part of the ‘TSCG’ brings very little progress by comparison with the ‘Euro Plus Pact ‘ given the logical difficulty for the EU to have influence on the detail of member states’ economic and social choices – except in the rare cases where they concluded aid and adjustment programmes with it (Greece, Ireland, Portugal).

The ‘TSCG’ is, in addition, set to be signed by only 25 of the 27 member states of the EU but it will be able to come into force once 12 of the 17 states of the eurozone have ratified it, together with whichever of the eight other countries ratify it, while the United Kingdom and the Czech Republic will stay outside it. In addition to these uncertainties about its scope, there is uncertainty as to the impact of the implementation of the ‘TSCG’ on the functioning of the single market, which represents both the legal and political base of European integration. In spite of the guarantees that are in the very text of the Treaty, it will of course be necessary to make sure that such a base is kept, including on the basis of a formal and regular assessment.

Because it focuses very much on the ‘solidarity-responsibility’ dialectic, the ‘TSCG’ is unbalanced from an economic point of view. Stability and austerity are necessary but not sufficient, in both the short and medium term, in an EU which also needs growth.

The negotiations that have led to the conclusion of the ‘TSCG’ have certainly allowed more references to growth, jobs and social cohesion (in articles 1 and 9). So it is now more than ever up to the European institutions to make the best possible use of these legal bases without limiting themselves to the ‘disciplinary’ dimension of the new Treaty.

It is especially up to them to take advantage of the European decision-making moments in 2012 to reaffirm that the EU can be a source of growth. The relaunch of the single market, renegotiation of the multiannual financial framework and issuing bonds to finance big infrastructure projects must therefore be the other aspects of a more global economic strategy of which the ‘TSCG’ is only one component.

Because it is about an ‘intergovernmental’ and not a community Treaty, the ‘TSCG’ has finally relaunched the debate on the institutional balances within the EU, even on the ‘community method’.

Putting in place a framework of action bringing together 25 states, eurozone summits with a permanent president or the involvement of national parliaments in the governance of economic and monetary union (EMU): these are elements showing how much the extra solidarity and responsibility that has emerged from the crisis needs national political authorities to further mobilise in a sufficiently formalised setting, so as to avoid a ‘de facto leadership’ that often goes down badly (e.g. the criticisms of ‘Merkozy’).

In this context, the involvement of national parliaments needs to be more clearly specified but also better articulated with that of the European Parliament, which needs to remain fully engaged in the EMU governance both within the national democracies-European democracy ‘continuum’ and in the framework of its relations with the Commission.

Similarly, having had to give priority to an intergovernmental path does not seem to have hampered the all-out effort of the Commission, for whom the ‘TSCG’ purports to strengthen the monitoring and controlling powers in budgetary and economic terms. That is progress that appears paradoxical but is in reality logical as the Commission is best placed to act in a long-term and effective way in these two areas as is already stipulated in the EU’s secondary legislation relating to EMU.

All in all, while a few semesters will need to go by for the effects of the ‘TSCG’ to be measured in full, we can probably take the view that the agreement on it may usefully contribute to forging the overall compromise allowing the EU to overcome the current crisis.