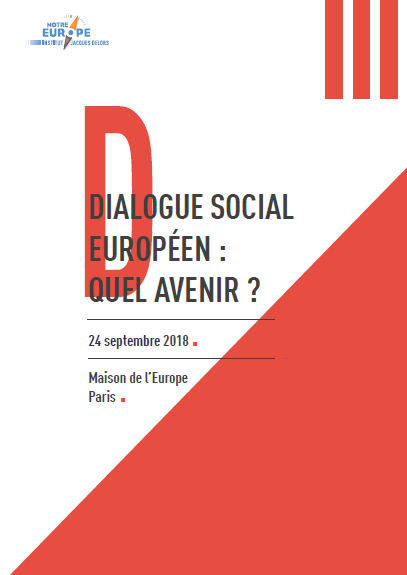 The Jacques Delors Institute is organizing, in partnership with the French trade union CFDT and the Maison de l’Europe in Paris, a conference on European social dialogue and its perspectives, on the occasion of the publication of the Jean Lapeyre, “History of a social innovation from 1985 to 2003” (in French).

The leaders of the 28 EU countries proclaimed last November at the Göteborg Social Summit the European Pillar of Social Rights (EPSR), which defines 20 principles and fundamental rights applicable to all Member States. It reaffirms the importance of European social dialogue in the design and implementation of economic, social and employment policies.

After a welcome by Catherine Lalumière, President of the Maison de l’Europe, and an introduction by Jean Lapeyre, former Deputy Secretary of the European Trade Union Confederation, a panel brings together Laurent Berger, General Secretary of the CFDT, Maxime Cerutti, director of social affaires of Business Europe and Katja Lehto-Komulailen, deputy general secretary of the European Trade Union Confederation, around the question “Social dialogue: what future?”. This debate is moderated by Frank Vandenbroucke, former Belgian minister of Labour.

To register, visit the website of the Maison de l’Europe.