The EU budget: What for?

This synthesis paper covers the main points of discussion raised in Notre Europe’s seminar on the EU budget, held on 19 April at the Committee of the Regions in Brussels. Academics, policy researchers and representatives of EU institutions debate the possible components of budget reform, focusing on allocation; redistribution; macroeconomic stabilisation; the budget’s size and structure; the financing system; and the decision-making process. The discussions revealed a broad consensus on the need to re-think the structure and content of the EU budget as well as to improve the budgetary decision-making. 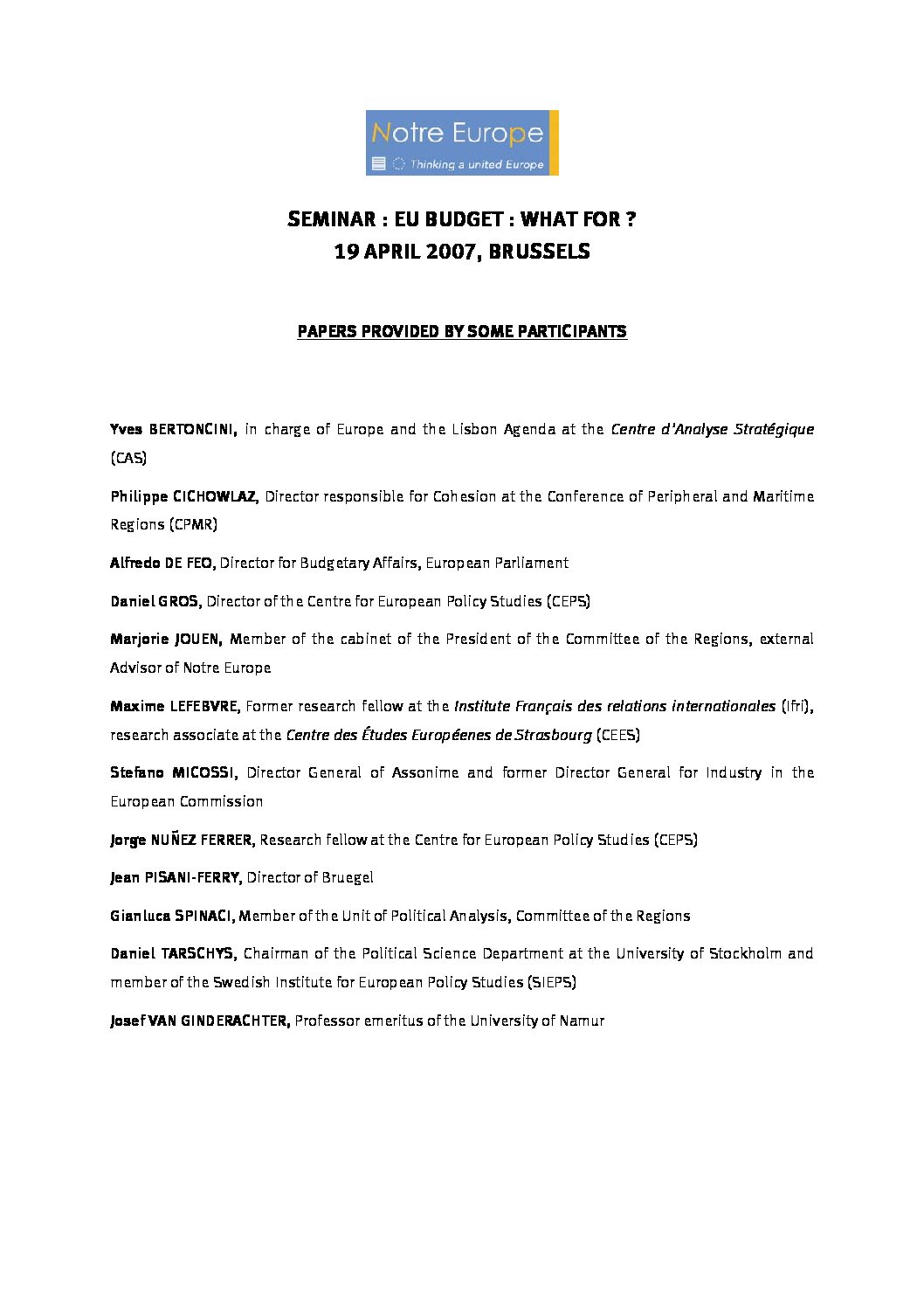 This synthesis paper covers the main points of discussion raised in Notre Europe‘s seminar on the EU budget, held on 19 April at the Committee of the Regions in Brussels.

Academics, policy researchers and representatives of EU institutions debate the possible components of budget reform, focusing on allocation; redistribution; macroeconomic stabilisation; the budget’s size and structure; the financing system; and the decision-making process.

The discussions revealed a broad consensus on the need to re-think the structure and content of the EU budget as well as to improve the budgetary decision-making.

In December 2005, the European Council adopted a final compromise for the medium-term financial perspectives for 2007-2013. While expressing satisfaction for the achievement of a compromise which had been particularly difficult to reach, a final clause was added inviting the Commission to undertake a full, wide ranging review covering all aspects of EU spending, including the CAP, and of resources, including the UK rebate” to report in 2008/2009.

A year-and-a-half after this announcement, the reform of the EU budget has become a major topic of discussion in both academic and policy-making circles. Notre Europe invited a group of academics, policy researchers and representatives of EU institutions to discuss the possible components of the reform in a seminar held at the Committee of the Regions in Brussels. The seminar was organised in five sessions. The first three sessions were devoted to debating the role of the EU budget with respect to the three classic functions of public finance: allocation, redistribution, and macroeconomic stabilisation. The remaining two sessions addressed the most pressing issues concerning the institutional design of the EU budgetary system (the size and structure of the EU budget, the financing system and the budgetary decision-making process), the idea being to discuss in more detail the operational implications of the decisions or points of agreements achieved during the morning.

The discussions revealed the existence of a broad consensus on the need to re-think the structure and content of the EU budget as well as to improve the budgetary decision-making system. There was, for instance, a general agreement on the need to reform the budgetary procedure to prevent negotiations for the next financial perspectives being stalled as they were in 2005. The dominance of the logic of “net returns’ in budgetary negotiations was unanimously criticised, and most participants agreed that political priorities should be clearly identified and reflected in the EU budget. There was also general agreement on the benefits of bringing more clarity and simplicity to the EU financing system and on the need to remove the UK rebate.

Yet, beyond these general points of agreement, the discussions put into evidence the existence of a wide variance of opinions, and even clear-cut disagreements, on various key questions placed at the centre of current debates on the EU budget reform. What is the exact meaning of “EU public goods” and “added value” and what are the implications of applying different criteria for the size and content of the EU budget? How to reform the EU budgetary procedure to fulfil the double criteria of efficiency and political legitimacy? What sort of reforms are required on the revenue side of the budget?

This synthesis paper will put forward the main arguments of discussion raised in the course of the seminar, without citing names of contributors. To give the readers the possibility of knowing in more detail the points of view and ideas of the various participants, the documents that served as basis for the interventions of some of the speakers are included in the appendix (only available in the electronic version).