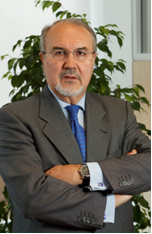 Chairman of the EFRAG Supervisory Board, Chairman of FRIDE, President of the Spanish section of the Hispano-Chinese Forum.

Pedro Solbes was born in 1942 in Pinoso (Alicante). After graduating in European economics from the Libre Université de Bruxelles and in law from the Complutense University of Madrid, he pursued advanced studies at the latter university, earning a doctorate in political science.

He joined the civil service in 1968 as an official at the Spanish Ministry of the Economy and Trade and subsequently has held prestigious positions at Spanish and EC institutions. In particular, he was Spanish Deputy Minister of Foreign Affairs from 1986 to 1991, with responsibility for relations with the European Community. From 1991 to 1993 he served as Minister of Agriculture, Food, and Fisheries, while from 1993 to 1996 and from 2004 to 2009 he was Minister of Economic and Financial Affairs. In the European Community, he was Commissioner of Economic and Monetary Affairs from 1999 to 2004.

He is currently chairman of the supervisory board of the EFRAG (European Financial Reporting Advisory Group), chairman of FRIDE (a private Spanish foundation focused on foreign relations and democracy), and president of the Spanish section of the Hispano-Chinese Forum.

Previously a member of the board of directors of several Spanish companies as the representative of public capital, he has been a member of Enels Board of Directors since May 2011.