The EU Institutional Crisis: By the Way… What do the new Member States think?

Seminar organised by Notre Europe in Paris on 9 Décember 2005 with the partnership of the Association France Pologne pour l’Europe, the Europeum, the Institut of Public Affairs in Warsaw, Providus and Euractiv. Only available in French. 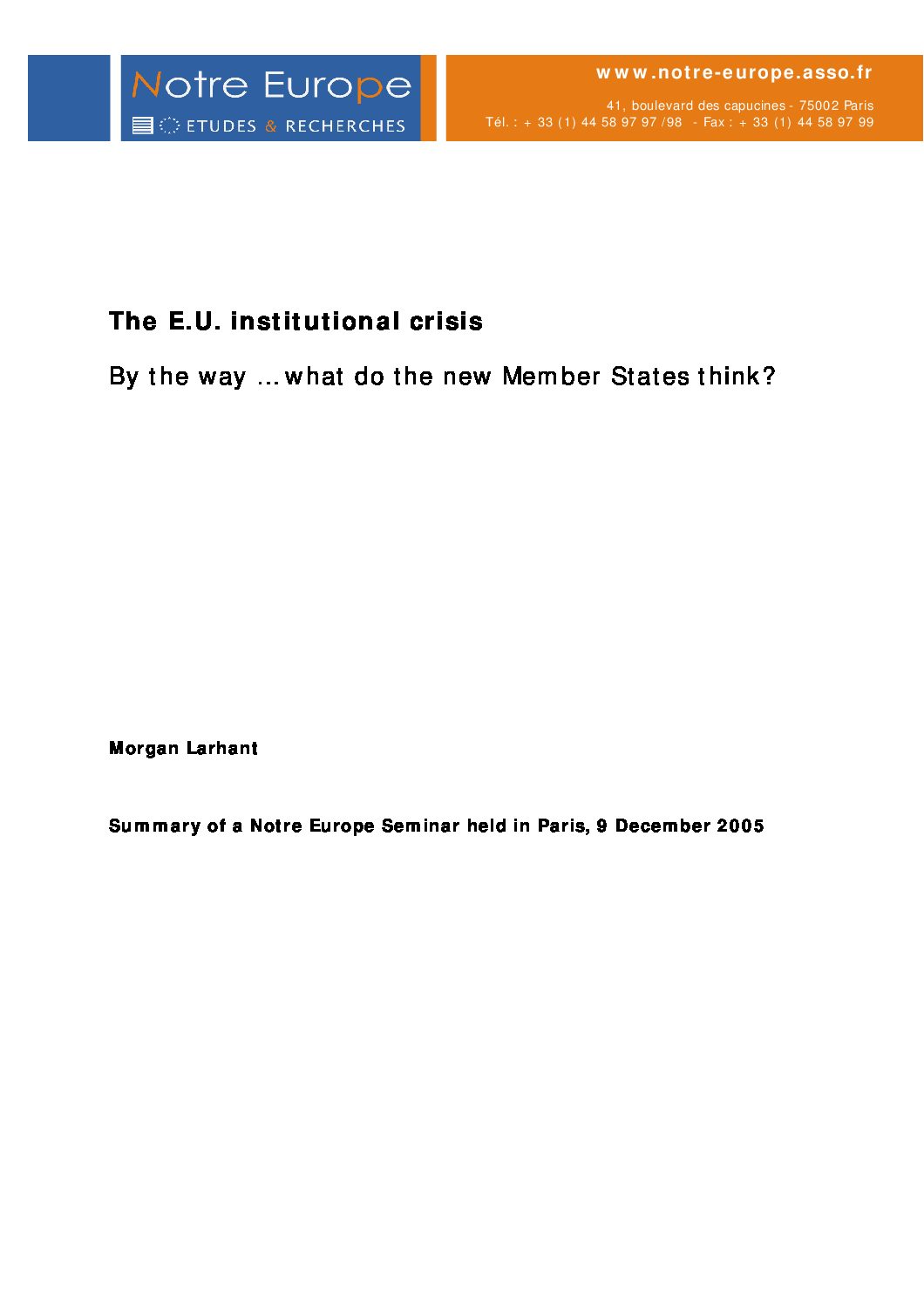 Since the end of communism (1989-1991), the countries in the former Eastern Bloc (Poland, Czech Republic, Slovakia, Hungary, Slovenia, Latvia, Lithuania, Estonia) have been involved in the European construction process in view of their integration. Consequently, they have become de facto agents of European socialisation. The EU has allowed them to gradually open up to the single market, to upgrade their judicial and modernise their administrations thanks to aid received under programmes such as PHARE. At the same time, these countries have joined the discussions on European identity, values and citizenship. Negotiations focusing on the community acquis, like those on the Convention on the future of Europe, in which they were full partners, mean that the stakes like the “Return to Europe”, which initially were ideological, abstract and external to these countries, became concrete and increasingly internalised in each country. For them this was the “domestication” of Europe. All of these moments have been decisive for the Community apprenticeship of the various players in Central Europe and for their integration into the European game. Some of them rightfully complained about the lack of symmetry in the process. They are particularly sensitive to this because these countries have just thrown off a dominating power, the Soviet Union, which had deprived them of the right to self-determination. In addition, eurosceptics, euro -realists and other anti-Europeans, who are very active on the political scene in Central Europe, have always voluntarily promoted confusion by comparing the EU to the USSR and arguing that, like Soviet Russia, the EU asks new members to voluntarily abandon some of the newly regained attributes of sovere ignty.

On both sides, this process of mutual recognition is far from complete. The symbolic reference to the “Polish plumber” during the French referendum campaign may be considered as an instance of this unachieved evolution. This gibe is only the visible part of a real semantic problem. The political players in the EU must learn that misuse of symbols can have important consequences. This is not restricted exclusively to demagogues, who use it as a routine political weapon – but also and too often to staunch supporters of the EU. It is true that there is a real lack of European identity both in the new Member States and in the States that have belonged to the Union for much longer. In this context, the power of words is crucial. The carelessness with which politicians use makeshift metaphors is one example among others. It is hard to measure the damage done by metaphors taken from geometry (“circles”), thermodynamics (“hard-core combustion”) or economics and shipping (“roads” and “motorways”). For Eastern Europeans, this is perceived as an attempt to distinguish two categories of Europeans: first-rate citizens and second-rate citizens. The same sensitivity of the new Member States was apparent on 1 May 2004 in another semantic quarrel: were we enlarging the EU or reunifying Europe, as affirmed by Vaclav Havel and Bronislaw Geremek? For them, the words made a big difference. This is why they preferred to refer to “reunification” as if they wanted to underline the fact that their countries had never stop being European, despite the despite the division following the second World War. Words were important again during the discussion on the axiological, and particularly religious, roots in the Preamble to the treaty. It is no accident that Poland, the country of Pope John Paul II made it a key identity issue.

SITUATION AFTER ACCESSION AND REFERENDUMS

Since the accession of eight post-communist countries to the EU in May 2004, their relation to the EU has changed considerably. Despite fears of massive abstention, the vote for accession won by a large majority. However, leaders in Central Europe, such as B. Geremek, emphasized that “the lack of enthusiasm of the candidate countries is only the reflection of a lack enthusiasm of the 15”. The asymmetrical situation between these countries and the EU institutions, and between them and the older Member States, has shifted to a more balanced relationship since their adhesion as full members1. Accession has created new challenges for the administrations and political players in these countries, as they move from a fairly passive acceptance of community acquis before enlargement to an active contribution to the definition of Community policies and negotiations within the framework of the European institutions. For that matter their political clout on the European scene has just been demonstrated on the occasion of the compromise on financial perspectives. The countries of Central Europe have also been very active in discussions on the text of the Constitutional Treaty, both before and after enlargement (2002-2005). In addition to participating in the work on the Convention on the Future of Europe via full, representative delegations, these countries have had a significant influence up to the Intergovernmental Conference that finalised the text. On this occasion, each of these countries reproduced interesting splits between partisans and opponents of greater collaboration and these discussions were relayed by forums and by the media. This explains why knowledge of the European issues at stake was sometimes greater within these countries than in the older Member States. These countries used a variety of strategies during the discussions on the Convention, and there was almost no attempt to develop a Except, nevertheless, for the transitional periods that still restrict the rights of these countries in a few fields, such as access to the job market lobby based on the former Soviet bloc. The split reflected other distinctions: disagreement between small and large countries, between the countries that were formerly members of the Mitteleuropa region and the Visegrad four, etc. After the failure of the referendums in France and the Denmark, the discussion on the “constitutional” future of the European Union was frozen and deactivated. Some of the new members, such as Hungary, Lithuania, Slovenia, Slovakia and Latvia, which chose a parliamentary vote, ratified the Treaty between December 2004 and June 2005. Poland, and particularly the Czech Republic, which chose a referendum, seemed relieved to postpone the date of the vote following the failure of the referendum in France and the Netherlands. In fact, one gets the impression that the discussion is no longer a priority at government level, and information campaigns on the text of the treaty have melted away like snow. The crisis caused by the rejection of the text of the Constitution, and more generally by what appears to certain new Member States to be a crisis in “European governance”, does not radically question the European project. Nevertheless, perceptions of the symptoms of this crisis differ in the new and the old Member States. Fo r example, the absence of a solution to the conflict on the directive on the liberalisation of services, which has been approved by most new members, which are fundamentally more liberal, undermines mutual understanding. Nor do these countries understand the various restrictions on freedom of movement of labour, or the discussion on the disadvantages of relocating. Recent obstacles to adopting the budget for 2007-2013 were also considered as a major distortion of the principle of European solidarity. It goes without saying that the “euro crisis” is reflected in the internal partisan discussions in each country as they provide arguments for the Euro -sceptics (or euro -realists as they like to call themselves in the Czech Republic). However, even for these centrifugal trends, changing tactics has become urgent, as these States shift from European outsiders to insider status. Their participation in the elections in European Parliament in June 2004 illustrates this. The European order has changed totally since 1 May 2004. Despite the crisis of “European governance”, which is indirectly the consequence, the new Member States and their elites have not given up on Europe. As a Polish analyst said after the French rejected the text of the treaty: “This vote carries good news for Europe: a political Europe under another definition will arise in any case a Europe where the guidelines will be set by societies and not by technocrats”. Even after eliminating a hint of demagogy, the message remains strong. To win the next attempt at developing an EU constitution that will contribute to the mechanisms of integration, European citizens must be more closely involved in the debate.