What kind of Social Europe after the crisis?

This synthesis by Sofia Fernandes and Emanuel Gyger presents the main ideas introduced and debated in the course of the seminar on “What kind of Social Europe after the crisis?” organised by Notre Europe – Jacques Delors Institute and the Calouste Gulbenkian Foundation on 3 December 2013 in Brussels. 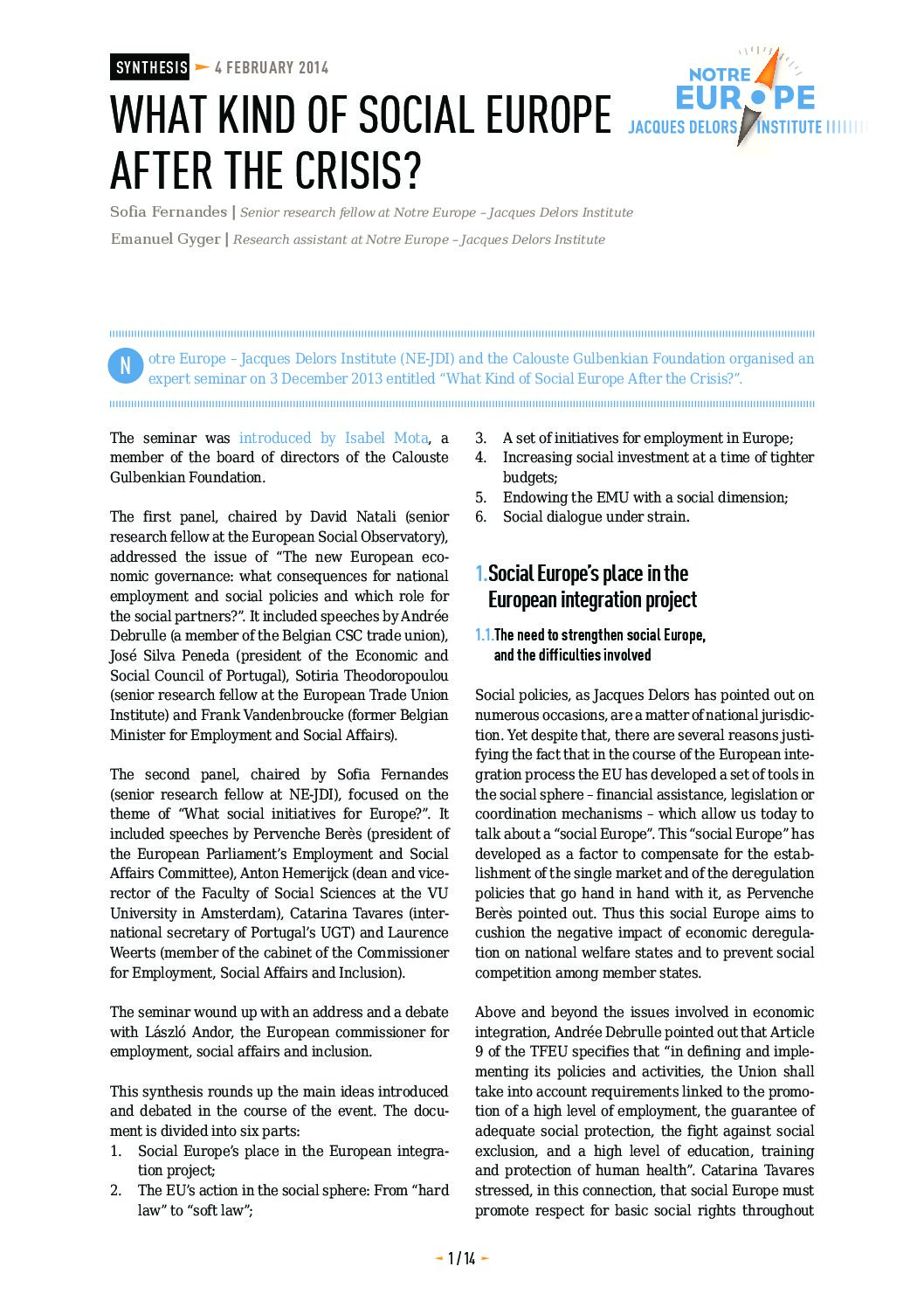 Notre Europe – Jacques Delors Institute (NE-JDI) and the Calouste Gulbenkian Foundation organised an expert seminar on 3 December 2013 entitled “What Kind of Social Europe After the Crisis?“.

This synthesis rounds up the main ideas introduced and debated in the course of the event. The document is divided into six parts:

1. Social Europe’s place in the European integration project
2. The EU’s action in the social sphere: from “hard law” to “soft law”
3. A set of initiatives for employment in Europe
4. Increasing social investment at a time of tighter budgets
5. Endowing the EMU with a social dimension
6. Social dialogue under strain

The seminar was introduced by Isabel Mota, a member of the board of directors of the Calouste Gulbenkian Foundation.

The first panel, chaired by David Natali (senior research fellow at OSE), addressed the issue of “The new European economic governance: what consequences for national employment and social policies and which role for the social partners?”. It included speeches by Andrée Debrulle (member of the Belgian CSC trade union), José Silva Peneda (president of the Economic and Social Council of Portugal), Sotiria Theodoropoulou (senior research fellow at ETUI) and Frank Vandenbroucke (former Belgian Minister for Employment and Social Affairs).

The second panel, chaired by Sofia Fernandes (senior research fellow at NE-JDI), focused on the theme of “What social initiatives for Europe?” It included speeches by Pervenche Berès (president of the EP’s Employment and Social Affairs Committee), Anton Hemerijck (dean and vice-rector of the Faculty of Social Sciences at the VU University in Amsterdam), Catarina Tavares (international secretary of Portugal’s UGT) and Laurence Weerts (member of the cabinet of the Commissioner for Employment, Social Affairs and Inclusion).

The seminar wound up with an address and a debate with László Andor, the European Commissioner for Employment, Social Affairs and Inclusion.